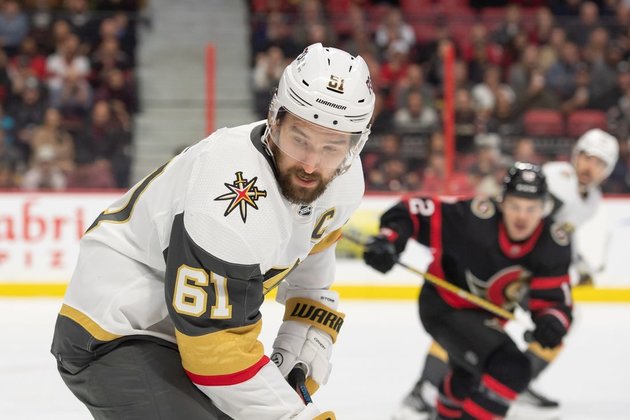 The Vegas Golden Knights maintained their winning streak and continued their hot start, but their main theme Thursday was about withstanding a flawed performance.

After surviving the Ottawa Senators, the Golden Knights will seek a seventh straight win Saturday night when they visit the Montreal Canadiens.

The first three wins of the streak saw Vegas outscore Toronto, San Jose and Anaheim by a combined 11-3 margin. Then they scored the tying goal in the third period before getting overtime goals from Jack Eichel and Shea Theodore to beat Winnipeg and Washington.

On Thursday, the Golden Knights held on for a 5-4 victory in Ottawa. Mark Stone, Reilly Smith, Zach Whitecloud, Chandler Stephenson and William Carrier scored as Vegas sped out to a 5-1 lead in the first 30:14. It allowed the next three goals and survived allowing a season-high 46 shots on goal thanks to a 42-save performance by goalie Logan Thompson.

"That was not a perfect game by us by any means," Stone said after the Golden Knights allowed more than three goals for the first time this season. "Wasn't close to our standard. Some nights you're not going to feel great and you're not going to have that execution as a team, but when you find ways to win, that's the difference between teams that win and teams on the outside (of the playoffs)."

Being able to win while turning in a flawed showing enabled the Golden Knights to win for the 10th time in 12 games and keep pace with the Boston Bruins in the early President's Trophy race.

Montreal is hoping it can cause another imperfect showing by Vegas and solve some of its recent scoring woes. Since their 6-2 win over Arizona on Oct. 20, the Canadiens are 2-3-1 in their past six games.

While they scored seven in a three-goal win over St. Louis last Saturday, they have been held to nine goals in their other five games, including Thursday's 3-2 overtime loss at Winnipeg.

Nick Suzuki scored 6:43 into the first period but less than a minute after Kirby Dach scored in the second, the Canadiens allowed the tying goal, then were held to four shots on goal in the third before succumbing in overtime.

Perhaps the best news was the season debut of defenseman Joel Edmundson after he re-injured his back in a training camp collision with Suzuki. He also missed the first 58 games with the same injury last season when Montreal started 0-5-0 and finished with 22 wins.

"We're in every game," Edmundson said. "I couldn't say the same about last year. But I feel like we're in every game and we're battling. We got a really young team. I think the chemistry in the locker room is definitely carrying over onto the ice.

"I think that's where you need to start with. If you can get the locker room under control, which we've done, that's going to translate on the ice. It's no surprise and I think it's a pretty exciting team to watch."

Montreal has won five of eight all-time regular-season meetings with Vegas, with three of those wins coming beyond regulation. Vegas earned a 5-2 win in Montreal Nov. 6 and Theodore scored the game-winner in overtime of its 4-3 home win Jan. 20.

AUSTIN Texas: The Federal Aviation Administration and the US National Transportation Safety Board said they are both investigating an aborted ...