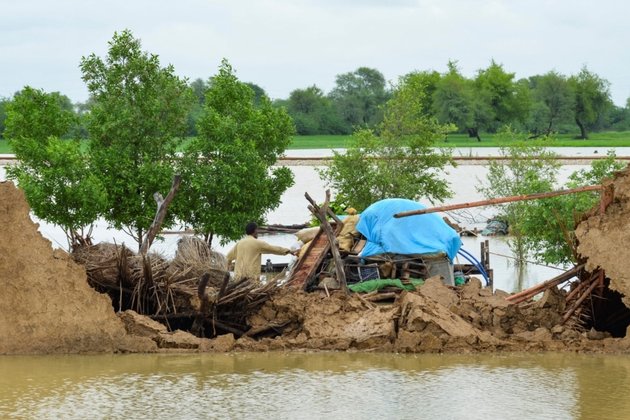 islamabad - Officials in Pakistan said Friday that weeks of flooding triggered by historic monsoon rains had killed nearly 1,000 people and "badly affected" 33 million others, and they appealed for international help to deal with the calamity.

The devastation across all four provinces of the country prompted Prime Minister Shahbaz Sharif to declare a national emergency amid forecasts of more rain, his office said.

Sharif was quoted as saying the government was working closely with the United Nations to launch a flash flood appeal on August 30.

Members of a family with their belongings wade through water following heavy rain and flooding during the monsoon season in Jamshoro, Pakistan Aug. 26, 2022.

Climate Change Minister Sherry Rehman described the seasonal rainfall as a "monsoon monster" and blamed climate change for the deadliest flooding in the South Asian nation of about 220 million people in more than a decade.

She declared that Pakistan was living through "one of the most serious climate catastrophes" in the world, and that it was wreaking nonstop havoc throughout the country.

"We are at this point ground zero, the front line, with extreme weather events, which we have seen from early this year in an unrelenting cascade of heat wave, forest fires, flash floods, multiple glacial lake-outburst-flood events and now the monster monsoon of the decade," Rehman said.

"The amount of water on the ground has inundated huge swaths of Pakistan, with 33 million people affected, many stranded," she said. "Thousands are without shelter; many are without food. And people are stranded."

Baluchistan, already battered by flash floods, lost communication with the rest of the country after massive overnight rains, said the English-language Dawn newspaper. The communication breakdown was hampering rescue and relief operations in the impacted region.

The Pakistan Telecom Authority said Friday that it had restored voice and data services in Baluchistan and efforts were being made to resolve "this unprecedented situation."

Volunteers prepare food boxes to distribute among the flood victims, following rains and floods during the monsoon season in Peshawar, Pakistan, Aug. 26, 2022.

Officials at the Pakistan Meteorological Department said the country saw its wettest July since 1961, warning another cycle of torrential rains could emerge next month. Rescue teams, assisted by Pakistani military troops, were erecting tents and shelters in the flood-affected areas, where many were without food and shelter.

Rehman said an assessment of needs was being prepared but that Pakistan would require all the international help it could get because dealing with the disaster was beyond the capacity of federal or provincial governments.

Sindh received '784%' more rainfall this month than the August average, while Baluchistan had received almost 500% more, according to official data.

Since mid-June, when the monsoon seasons began in Pakistan, more than 3,000 kilometers of roads, 130 bridges and tens of thousands of homes have been damaged across the country, according to the National Disaster Management Authority.

Parts of northwestern Khyber Pakhtunkhwa (KP) and central Punjab provinces might face "very high to an exceptionally high level of flooding" in the next few days, according to the NDMA forecast.

Former Prime Minister Imran Khan, whose opposition Pakistan Tehreek-e-Insaf party rules KP, visited flood-hit parts Friday and described on Twitter the level of destruction in the province as massive. The scenic Swat valley in the province was one of the hardest-hit districts.

The calamity has struck Pakistan at a time when the country faces an economic crisis, with dwindling foreign cash reserves and historic inflation.

The Sharif government has cut spending and increased fuel and utility prices to ensure Pakistan receives a much-needed $1.2 billion bailout loan from the International Monetary Fund.

The United Nations has responded by allocating $3 million. "This will be used for health, nutrition, food security, and water and sanitation services in flood-affected areas, focusing on the most vulnerable," said a U.N. statement.