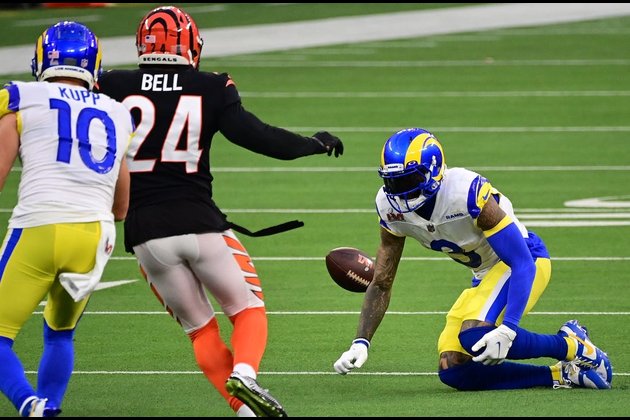 Only the free agent doesn't believe it.

Beckham, who joined the world champion Los Angeles Rams from the Cleveland Browns midway through the 2021 season, tweeted Saturday night that the injury occurred before the big game.

"Krazy thought ... really played the whole back half of the season without an acl, and won a super bowl! God doesn't misss, i swea," he wrote.

Beckham tore the ACL in the same knee in October 2020 with the Browns, had surgery and returned for the 2021 season. On Nov. 12, the Rams signed him to a one-year deal, a week after he was released by Cleveland amid a deteriorating relationship with quarterback Baker Mayfield.

He left the Rams' 23-20 win over the Cincinnati Bengals in Super Bowl LVI on Feb. 13 with what was believed to be a new injury.

During the second quarter, Beckham went to catch a pass but dropped it after jamming his left knee awkwardly. He grabbed at his knee and went down to the turf, with the Rams' training staff quickly attending to him on the field.

He caught a touchdown in the first quarter for the first score of the game and finished with two catches for 52 yards.

The three-time Pro Bowl selection had 305 receiving yards and five touchdowns for the Rams in eight regular-season games.

Rams chief operating officer Kevin Demoff told The Athletic last month that the Rams and Beckham, 29, would like to work out a deal for him to return in 2022.