Celtics favored at home to force Game 7 vs. Warriors 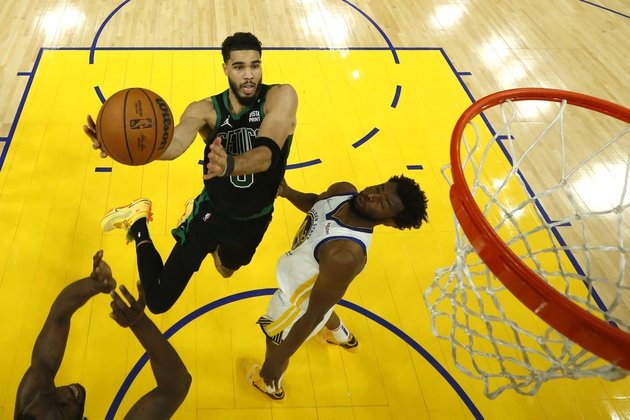 The Golden State Warriors enter Game 6 of the NBA Finals in Boston on Thursday with an enhanced edge of determination as a fourth title in eight seasons hangs in the balance.

Most of that edge, while facing the host Celtics, belongs to Warriors star Stephen Curry. The long-range shooting extraordinaire failed to make a 3-point basket in Golden State's 104-94 victory in Game 5 on Monday at home in San Francisco.

The Warriors still moved one victory away from a championship with a 3-2 lead in the best-of-seven series, despite shooting 9 of 40 (22.5 percent) from distance as a team. Curry went 0 of 9.

"Of course it bothers me as a shooter," Curry said. "You want to impact the game that way. But thankfully that's not the only thing that you do out there on the court."

Instead, the Warriors played high-level defense in Game 5, holding the Celtics to 39 first-half points and 41.3 percent shooting in the game. They shared the ball with 23 assists and had just seven turnovers to 18 for Boston.

Just don't expect that to be the new way forward.

"Obviously, track record says I shoot the ball better the next game," said Curry, whose record streak of 132 consecutive playoff games with a 3-pointer came to an end. "Looking forward to that bounce back."

A determined mindset won't be exclusive to the Warriors, of course. Boston heads home keen on extending the series to a Game 7 back on the West Coast.

The Celtics are 3.5-points favorites at BetMGM, where they have been backed by 59 percent of the spread bets and 69 percent of the handle. However, the same line at PointsBet has seen the Warriors draw 59 and 71 percent of the action, respectively.

The action has been split on Boston as a 4.0-point favorite at DraftKings. The Warriors have been supported by 52 percent of the spread bets while the Celtics have drawn 55 percent of the handle.

A championship would give Boston an 18th banner to hang in the rafters, which would be the most all-time. They are tied with the Los Angeles Lakers at 17 championships apiece, but they have not won one since 2008.

While the Warriors tilt heavily toward Curry, the Celtics lean on Jayson Tatum, who had 27 points and 10 rebounds in the Game 5 defeat.

Behind Tatum's 26.2 points, 6.9 rebounds and 6.1 assists per game average in the playoffs, the Celtics have been on a wild ride. Since a sweep over the Brooklyn Nets in the first round, they haven't won consecutive home games over the next three rounds and are 2-3 at home since the start of the conference finals.

Boston did protect its home court to win Game 7 of the conference semifinals against the Milwaukee Bucks but lost at home with a chance to eliminate the Miami Heat in the conference finals. They advanced by winning Game 7 on the road.

"You know, I've said it before: You better be confident, right?" Tatum said. "We ain't got to win two in one day. We just got to win one game on Thursday. We've been in this situation before. So it's not over. Got to win on Thursday. That's all we got to worry about right now."

The Celtics switched up their coverage on Curry out of Warriors pick-and-rolls, but now they've lost that element of defensive surprise going into Game 6.

While it kept Curry in check, Golden State's Andrew Wiggins had a team-high 26 points to go with 13 rebounds. Klay Thompson had 21 points for the Warriors and was 5 of 11 from 3-point range.

"Yeah, better job on him; a little more physical there," Celtics head coach Ime Udoka said of the defense on Curry. "Overall, it's a solid job on him, but again, I don't know if it was our defense as much as offensive struggles that hurt us (in Game 5)."

The 210.0-point Over/Under at DraftKings has drawn 57 percent of the bets and handle to the Over. The market opened at 211.5 points at BetMGM but has moved to 209.5 with the Under backed by 52 and 60 percent of the action, respectively.