Tigers hope to be less revealing vs. Blue Jays 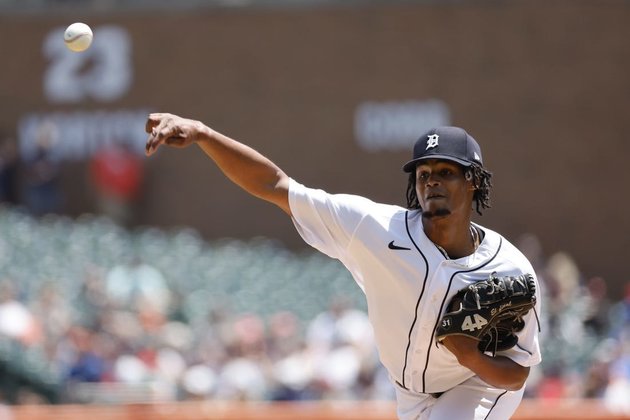 Elvin Rodriguez has gained a reputation of being a big tipper. It is not something that makes him proud.

Rodriguez, a Detroit Tigers rookie right-hander, learned after his disastrous start at Yankee Stadium last weekend that he was tipping some of his pitches. He will try to correct those tells when he starts the opener of a three-game home series against the Toronto Blue Jays on Friday night.

Rodriguez was pummeled for 10 runs on 11 hits, including four home runs, in 4 1/3 innings last Friday. He found out following his third career start that when he worked out of the stretch with runners on base, he looked intently toward third base before throwing fastballs. When he threw other pitches, he either took a quick look toward third base or continued to look toward home plate.

"I didn't realize I was doing that, but I saw the video," Rodriguez said. "Yeah, I was tipping. They figured me out. I'm going to work in my next bullpen at trying to do the same movement."

"I'm sure he'll look back on this as a stepping stone or as a growing moment in his career, to help persevere through some things," Barnhart said. "His next start is big. We're going to do everything we can to help him prepare."

From now on, Rodriguez (0-1, 10.13 ERA) plans to keep his head locked on home plate when he works out of the stretch.

The Tigers are coming off back-to-back wins at Pittsburgh after getting swept by the Yankees.

Toronto is in the midst of a six-game road trip. The Blue Jays took two of three games at Kansas City earlier this week. After posting consecutive shutout victories against the Royals, Toronto lost the series finale 8-4 on Wednesday.

Already awash with young talent, the Blue Jays are adding their top prospect to the active roster. Catcher Gabriel Moreno is expected to make his major league debut this weekend. The 22-year-old is batting .324 with one home run and 23 RBIs for Triple-A Buffalo this season.

"He wants to be great," Buffalo manager Casey Candaele said, according to MLB.com. "He's driven to do the things that he needs to do to get better. There's no problems.

"When I think of a kid who's that age and gotten so much publicity already, to be able to handle that is very difficult. To think that he has to go through that stuff and keep a sane mind, he does a great job of understanding."

Jose Berrios (4-2, 5.24 ERA), the Blue Jays' starter on Friday, tossed a gem in his last outing Saturday in a 12-3 win. He held Minnesota to two runs on three hits and struck out 13 in seven innings. He surrendered six runs in 2 1/3 innings in his previous start May 29 against the Los Angeles Angels in an 11-10 win

"I'm trying to stay fresh and strong," Berrios said. "I've really been trying to work on that. In my (previous) outing, I felt a little bit weak. My arm didn't feel the way I wanted, but I've worked since my last outing and into this one to be in a better position (Saturday). I did it."