Golden Knights must beat Blackhawks, get help to stay alive 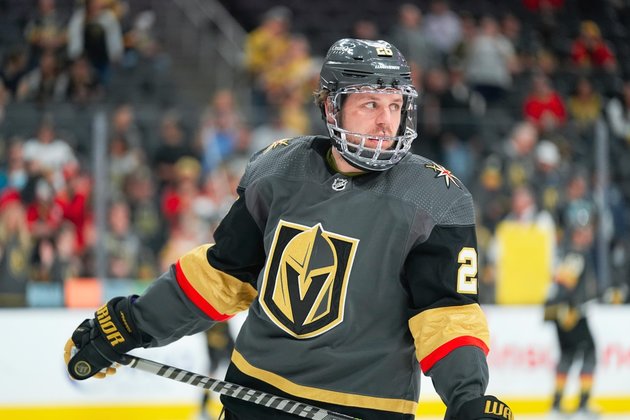 The Vegas Golden Knights head into Wednesday night's game at the Chicago Blackhawks with a playoff pulse -- barely.

After losing 3-2 in a seven-round shootout at Dallas on Tuesday night, the Golden Knights (42-31-7, 91 points) trail the Stars by four points. Two games remain for both teams.

Vegas, which holds the regulation wins tiebreaker, 33-30, must win in regulation over the Blackhawks and Friday at St. Louis while also needing Arizona (Wednesday) and Anaheim (Friday) both to win in regulation at Dallas to avoid missing the playoffs for the first time in the franchise's five-year history.

"I mean, we've still got a pulse, we're not eliminated," Vegas coach Peter DeBoer said. "I'm proud of our group. I thought we came in and played one helluva road game."

DeBoer admitted that defeating the Blackhawks in the second half of a back-to-back won't be easy after the physical and emotional game with the Stars.

"We've got to win," DeBoer said. "It's not perfect, back-to-back. We emptied the tank tonight. We don't have a choice. We've got to find a way to re-energize here and get ready and win a game tomorrow."

The Golden Knights have lost back-to-back games in shootouts, dropping two key points in the process. Vegas also lost to San Jose in Las Vegas, 5-4, on Sunday and went a combined 0-for-10 in shootout attempts in the two losses.

"It's tough to lose two shootouts in the last two games, in games you probably think you should win," captain Mark Stone said. "Tough pill to swallow. Unfortunately we're going to need a lot of help here, and we're going to have to take care of business tomorrow and on Friday. We're professionals. We've got to be ready for tomorrow because we're still fighting. You just never know in this league. Crazier things can happen."

Chicago (27-42-11, 65 points) comes in off a 3-1 victory over Philadelphia on Monday and will be playing its final home game of the season. The Blackhawks play at Buffalo on Friday in their season finale.

Chicago played Vegas tough this season, beating them 2-1 on Jan. 8 in Las Vegas behind 30 saves by former goaltender Marc-Andre Fleury, and then blowing a 3-0 third-period lead in a 5-4 overtime loss on March 26 also in Las Vegas.

The win over the Flyers on Monday was Chicago's first in regulation since a 4-2 victory at Anaheim on March 23. It came after a morning pep talk from interim head coach Derek King about finishing the season on a strong note at home.

"We owe it to them (the fans) and I said you owe it to each other," King said. "There's no reason you can't work, do all the other things structure-wise well and all the details well and have fun."

Patrick Kane tied his career-high with his 66th assist on an Alex DeBrincat goal in the win.

"Kaner should have had about another 10 assists tonight," King said. "He was feeling it. It was good to get a win, especially at home. We talked about (finishing) right at home (and getting) the fans out of their seats."