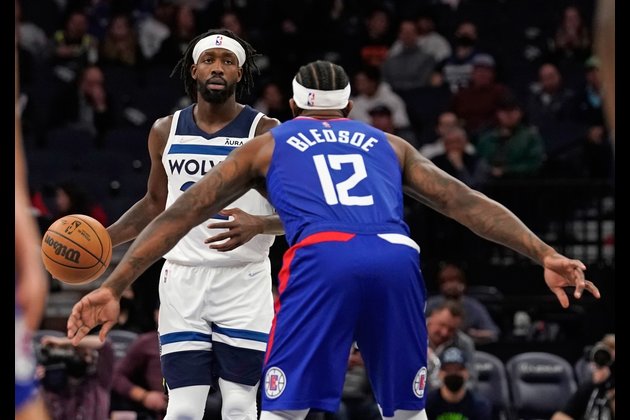 The Minnesota Timberwolves have reached the playoffs just once since the 200405 season, but they have an opportunity to clinch a postseason spot Tuesday night when they face the Los Angeles Clippers in a play-in game in Minneapolis.

The winner of the contest between the seventh-seeded Timberwolves and eighth-seeded Clippers advances to the Western Conference playoffs and will face the second-seeded Memphis Grizzlies in the first round. The loser plays Friday for a second chance at reaching the postseason field.

Minnesota opened as a 2.5-point favorite at BetMGM but the line had moved to 3.5 by Tuesday despite 58 percent of the spread-line bets and 64 percent of the handle supporting Los Angeles. The Clippers' 125 moneyline was also drawing 72 and 69 percent of the action, respectively.

The line has held steady at 3.0 points at PointsBet, where the Clippers are also favored by the public with 62 percent of the spread bets and 56 percent of the handle.

Minnesota (46-36) appears to be a team on the rise after posting a winning record for just the second time in 17 seasons. The improvement is directly due to the presence of three-time All-Star Karl-Anthony Towns and 20-year-old rising star Anthony Edwards.

The Timberwolves lost six of their final 10 regular-season games to miss out on a top-six playoff spot, so their avenue to the postseason is via the play-in round.

"It's a good first step," Minnesota coach Chris Finch said. "This needs to be the foundation of what we're trying to build, and regardless of what happens from here, we've got a lot of things that we've learned."

Falling short isn't on the mind of Towns, who averaged 24.6 points and 9.8 rebounds in 74 games this season.

"I'm not too worried about the play-in," Towns said. "We're going to go in there, play Timberwolves basketball, fight the fight, get the win and find ourselves playing for the real thing."

The Clippers (42-40) went 3-1 against the Timberwolves with the three victories (all in November, two of them in Minneapolis) coming by an average of 19.3 points. Minnesota won the teams' most recent matchup 122-104 on Jan. 3 in Los Angeles.

Of course, the Clippers own a big experience edge when it comes to playing in big games. Last season, they reached the Western Conference finals before losing to the Phoenix Suns in six games.

Even so, Los Angeles coach Tyronn Lue doesn't believe it gives his club an advantage in this situation.

"I don't really believe in that," Lue said. "With one game, anyone can get hot, we can have a bad shooting night or anything."

While Kawhi Leonard (ACL) missed the entire regular season and remains out, fellow Clippers star Paul George has been superb since his return from an elbow injury that sidelined him for more than three months.

George only played in 31 regular-season games and averaged 24.3 points.

Edwards, who averaged 21.3 points, understands the key element to this contest.

George, 31, figures to see a mix of Minnesota defenders, one being hard-nosed guard Patrick Beverley.

Beverley spent four seasons being a defensive pest for the Clippers but felt disrespected in contract negotiations after last season. That set off a couple of moves in which Beverley eventually landed with the Timberwolves.

Beverley is now doing his rambunctious, irritating, in-your-face stunts for Minnesota and George is trying to stay away from dealing with his theatrics.

The Clippers received a boost last week when Norman Powell returned from a foot injury that sidelined him for 22 games. Powell averaged 22 points and hit 7 of 10 from 3-point range in his two games back.

The market has held steady at 230.5 points at BetMGM with the Under backed by 66 and 87 percent, respectively.