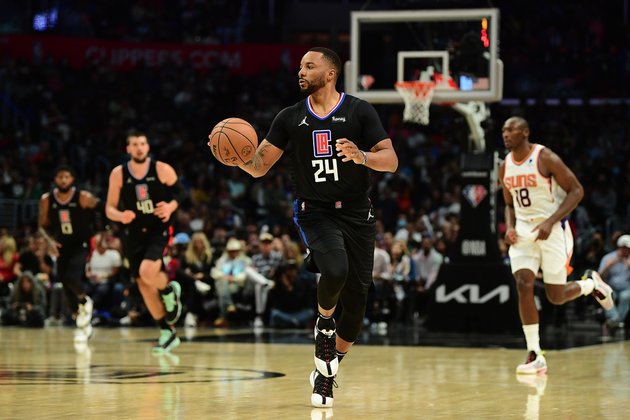 The Los Angeles Clippers begin preparations for their now-identified opponent in the Western Conference play-in tournament when they host the Sacramento Kings on Saturday night.

The Clippers (40-40) will enter their final two games of the regular season locked into the No. 8 position in the West,and will get two chances to advance into the eight-team Western playoff field next week.

They'll have an opportunity to secure the No. 7 seed and a first-round matchup with the Memphis Grizzlies when they visit the Minnesota Timberwolves on Tuesday.

Should the Clippers lose that game, they'd get a second shot at the playoffs when they would host the winner of the 9-10 play-in between the New Orleans Pelicans and San Antonio Spurs on Friday. The winner of that game will draw the top-seeded Phoenix Suns in the first round.

The Clippers appear to be trending in the right direction headed into the postseason, and not just because home wins over the lottery-bound Kings (29-51) and Oklahoma City Thunder this weekend would give them a five-game winning streak to pack for the trip to Minneapolis.

The Clippers have been working Paul George back into playing shape over the course of the last five games since he returned from an elbow injury after having been sidelined for more than three months.

George has been limited to 32 minutes and was given last Friday off in the middle of the five-game stretch. But he's nonetheless stamped himself healthy after averaging 22.5 points, 5.0 rebounds, 5.5 assists and 3.0 steals in his four games.

Los Angeles also have gotten Norman Powell back on the court following his nearly two-month absence to deal with a fractured left foot. He played 23 minutes in Wednesday's home win over the Suns, hitting three 3-pointers in a 24-point performance.

"We can be really dangerous," Powell boasted after the win over the Suns. "We have weapons at every position. I'm excited for what we can do in the playoffs. I definitely think teams are definitely going to have to worry about us."

They'd have to worry more if Kawhi Leonard is cleared to return after knee surgery. Powell insisted he has no idea when that might be.

"I think his rehab is trending in the right direction," Powell reported. "As you know, and everybody else, you are not going to get too much information out of Kawhi."

It's possible neither George nor Powell will play both games this weekend. Playing Saturday and resting Sunday would give them each two days off before the play-in game.

Even while set in their play-in position, the Clippers do have a bit of unfinished business. They've lost two of three to the Kings, including 124-115 at home in December.

In fact, Sacramento has won four of its last five road games against Los Angeles.

The Kings will enter this meeting having lost two in a row to close out their home campaign. Davion Mitchell continued to put an impressive finishing touch on his rookie season with 15 points and 17 assists in a 123-109 loss to New Orleans in his team's most recent action Tuesday.

While his club has passed the 50-loss milestone, interim coach Alvin Gentry has seen growth, especially in Mitchell.

"A month and a half ago, he was still this quiet little rookie who would not say very many words during timeouts or anything," Gentry said. "That's changed drastically. He feels confident. He's not afraid to have an opinion or voice something, and I think that's really good."