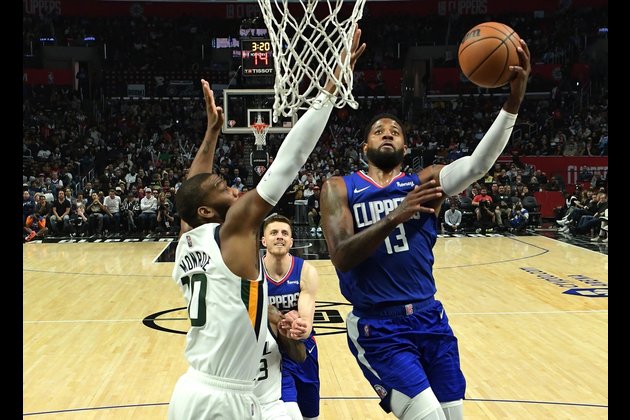 Paul George has returned just in time for the Los Angeles Clippers, whose postseason outlook has improved dramatically.

The re-energized Clippers are riding a wave of momentum as they begin a two-game road trip on Thursday against the Chicago Bulls.

George made an impressive return to the lineup on Tuesday after missing three-plus months with an elbow injury. The seven-time All-Star scored 34 points in 31 minutes and helped the Clippers rally from a 25-point deficit to beat the Utah Jazz 121-115.

The victory snapped a five-game losing streak for Los Angeles (37-39), which sits in eighth place in the Western Conference.

Clippers coach Tyronn Lue had been resting his veterans over the past two weeks, but he plans on getting everyone playoff-ready over the final six games of the regular season.

"Now we're able to ramp those guys back up," Lue said. "Because now they gotta play more minutes with (George), so we can get our flow, get our rotations. It's kind of backward from what you usually do. Late in the season, you usually rest guys, but our guys gotta play now because PG's coming back and trying to get acclimated."

The Clippers are looking to even the season series against Chicago after losing 100-90 on Nov. 14.

Chicago (44-32) bounced back from a loss to the New York Knicks with a 107-94 victory over the Washington Wizards on Tuesday. DeMar DeRozan scored 14 of his 32 points in the fourth quarter to lead the Bulls.

Nikola Vucevic added 27 points for Chicago, which is in fifth place in the Eastern Conference and hoping to avoid the play-in tournament. The top six teams advance directly to the postseason.

DeRozan was 2-of-12 shooting in the first half against Washington before leading his team to victory in the second half.

"I don't let missed shots discourage me," DeRozan said. "I've learned to have a short-term memory when it comes to missing shots.

"You've just got to keep going. I understand you can't be perfect. You can't make every single shot. But for me, especially in the fourth quarter, I just try to erase whatever happened the previous three quarters shot-wise and just try to focus in and hone in at a different level whenever it's time for me to be aggressive. I never let missed shots discourage me at all."

The Bulls also received a spark from second-year forward Patrick Williams, who had six points, seven rebounds and one steal in 25 minutes against Washington.

Williams has struggled to find consistent playing time since returning from a wrist injury on March 21. The 20-year-old missed nearly five months due to the injury.

Chicago coach Billy Donovan is exercising patience with Williams but also wants to see him bring more energy to the court.

"For the minutes that he does get, we need all-out Patrick," Donovan said. "Whether it's 12 minutes or 25 minutes, you know? A lot of it has gotta be, what's he doing with the minutes he's getting. There is, with young players, a very, very fine line between just giving a guy something minutes without him earning it."