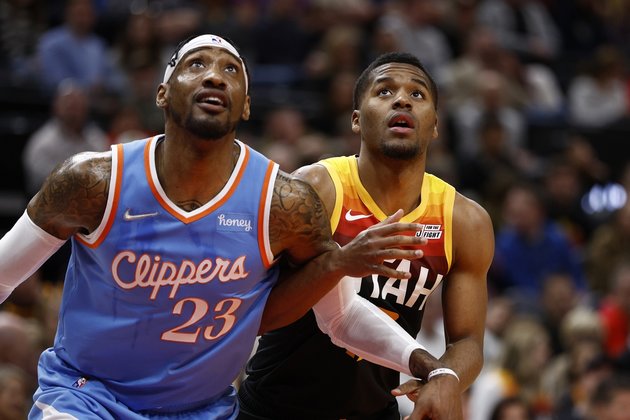 The Utah Jazz and Los Angeles Clippers are mired in losing streaks at a bad point in the season, with one of those teams set to end their untimely slide when they meet at Los Angeles on Tuesday.

The Jazz have slipped into fifth place in the Western Conference and wouldn't even host a playoff series if the season ended now. Their 114-110 road loss in Dallas on Sunday night allowed the Mavericks to move past them and into fourth place.

The Denver Nuggets are lurking close behind and even the Minnesota Timberwolves -- currently situated in seventh place, part of the play-in round -- are in position to make a run.

The Clippers have been eliminated from the top-six-seed derby after their recent slide and are lodged in eighth place.

Los Angeles has been especially poor while losing its last three games by an average of 22 points. One of those setbacks came against the Jazz, 121-92 on March 18 in Salt Lake City.

In fact, Utah has won both meetings between the teams this season by an average of 25 points.

The Clippers have been off since Friday, when they were routed 122-97 by the visiting Philadelphia 76ers. Philadelphia led 64-43 at halftime and its lead topped out at 28 points.

"We were overmatched. They played well and we didn't play our best game," Los Angeles coach Tyronn Lue told reporters. "We had some chances to cut the lead a couple times. We got some rebounds but then turned it over, and then the game got away from us."

One piece of good news for the Clippers was that seven-time All-Star forward Paul George (elbow) played 5-on-5 on Sunday and was slated to partake in practice on Monday. He was upgraded to questionable for Tuesday after not playing since Dec. 22.

"We are dragging a little bit and to get a guy like PG back would definitely help us out," Lue said.

Utah had a scare involving three-time All-Star shooting guard Donovan Mitchell, who injured his right ankle during the loss to Dallas.

Mitchell said after the game that the ankle was sore, but he was not mentioned in the Jazz's injury report Monday night.

Mitchell played 32 minutes but had just 12 points on 4-of-13 shooting. He averaged a robust 30.5 points over the previous eight games.

Utah also was without three-time All-Star center Rudy Gobert (leg) against the Mavericks. He is listed as questionable to return against the Clippers.

Forward Rudy Gay led the Jazz with 18 points against Dallas. It was just his second double-figure outing of the month.

As for the Clippers, guard Amir Coffey scored a team-best 21 points on 9-of-15 shooting in the loss to Philadelphia.

Isaiah Hartenstein added 16 points and nine rebounds and has scored in double digits in five of the past six games.