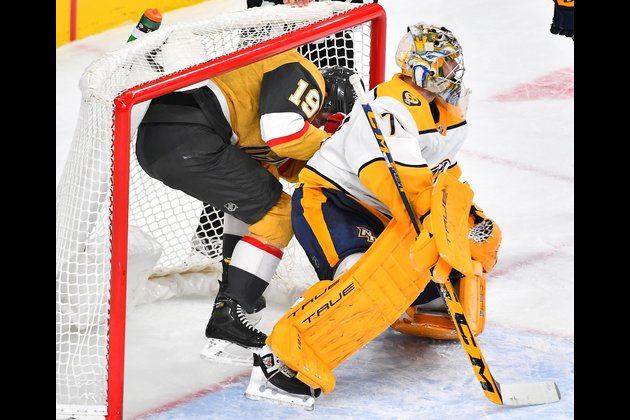 The Vegas Golden Knights have made the playoffs in each of their first four seasons in the league, including a storybook run to the Stanley Cup Final during their inaugural campaign.

But going into Thursday night's game with the Nashville Predators in Las Vegas, the sputtering Golden Knights findthemselves below the Western Conference playoff line and in serious danger of missing the postseason for the first time in franchise history.

Vegas is just 2-7-0 over its last nine games and was shut out in both games on its most recent two-game road trip to Minnesota (3-0) and Winnipeg (4-0), just the second time in team history the Golden Knights were shut out in back-to-back games (both times this season).

The Golden Knights trail Nashville, which has played two fewer games, by six points for the first wild-card spot and Dallas, which has four games in hand, by a point for the final playoff spot.

The good news? After Thursday night's contest with Nashville, which will be the 1,000th of Peter DeBoer's head-coaching career, the Golden Knights begin a stretch of seven games against teams currently outside the playoff picture, including back-to-back games at expansion Seattle.

Vegas has won its last three home games, including impressive five-goal outings against both Florida (5-3) and Los Angeles (5-1). However, it has been outscored 30-11 during its last seven losses and enter Thursday's contest on a scoreless streak of 121 minutes and 12 seconds.

"You're not going to make the playoffs doing that," forward Jonathan Marchessault said. "We've got to ramp up some wins here."

Tuesday's loss at Winnipeg, which is just two points behind Vegas in the playoff race, was particularly frustrating. Vegas outshot the Jets, 17-4, in the first period and did not yield a shot on goal over the first 15:04. The Golden Knights finished with a 42-26 edge in shots on goal with Chandler Stephenson and Dylan Coghlan both hitting posts and Stephenson also clanging one off the crossbar.

"I thought we came with good intentions," DeBoer said. "Loved our start. I thought the guys worked all night. Not getting out of that first period with a goal really hurt us. I thought we did everything right but you've got to score to win games in this league, and we didn't score on this trip."

Entering Wednesday's action, Nashville trails second-place St. Louis by one point in a tightly contested Central Division race and is tied with third-place Minnesota with 78 points -- but the Predators have played three more games.

The Predators are finishing up a three-game western road trip that began with a 6-3 victory at Anaheim on Monday and a 6-1 loss at Los Angeles on Tuesday.

Nashville fell behind 3-0 in the first 11 minutes against the Kings and managed just a Philip Tomasino goal in the second period before Los Angeles scored three more times in the third.

"I think in general the first period probably cost us the game," said Nashville coach John Hynes. "On a positive side with the group, I really liked our pushback. We stayed with it, I think the guys made some adjustments that we had talked about and I liked our competitiveness as the game went on. ... We've got to make sure that we're ready to go against Vegas, and I'm confident we will be."