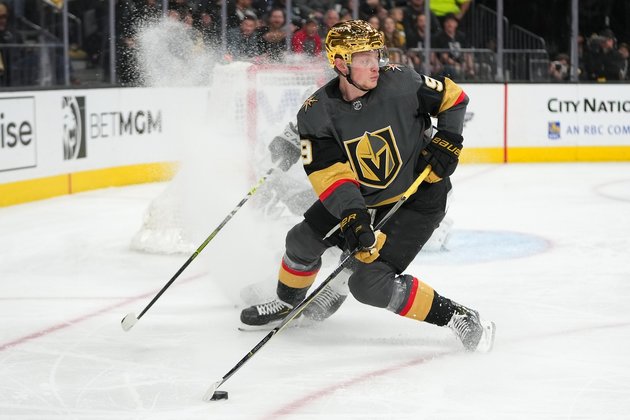 With a franchise-record five straight regulation losses finally in the rearview mirror, the Vegas Golden Knights will begin a key three-games-in-four-days stretch Monday night when they face the Minnesota Wild in Saint Paul, Minn.

Vegas is in fourth place in the Pacific Division, two points behind Edmonton Oilers, and is clinging to the final Western Conference wild-card spot.

Following Monday night's game, they visit the Winnipeg Jets on Tuesday before returning home Thursday to host the team four points ahead of them in the first wild-card spot, the Nashville Predators.

The good news for Peter DeBoer and company is that star center Jack Eichel returned to action Saturday afternoon in the team's 5-1 victory over the Los Angeles Kings. Eichel had been listed as doubtful after getting hit in the right hand blocking a shot late in the second period of a win over Florida on Thursday, when the Knights snapped their losing streak.

Eichel's hand was too sore for him to take any faceoffs Saturday but he did set up Chandler Stephenson for what proved to be the game-winner with a nice crossing pass from near the right boards. It was his sixth assist and 11th point in 16 games since returning from neck surgery.

"I didn't have to do anything, just put my stick there," said Stephenson, who redirected the pass into an open left side of the net for his career-best 15th goal of the season. "That's the kind of player (Eichel) is. He's an All-Star. You can be anywhere. Even if there are three guys, four guys in front of you, he seems to be finding you."

"I've just been really impressed with him," DeBoer said. "His battle level, his compete, his willingness to play a 200-foot, playoff-type game for us. And now he's willing to play through some injuries in order to be out there helping us. There's a lot of good things there."

Rookie Logan Thompson made a career-high 38 saves in the win over the Kings and has started back-to-back games after backup Laurent Brossoit, filling in for the injured Robin Lehner (lower body), was just 1-6-1 with a 3.36 goals-against and .875 save percentage since Feb. 16.

"The decision to go with (Thompson) was easy -- we've got to win games," DeBoer said. "... If you want to play this time of year, you have to find a way to win games."

Minnesota will be playing the fourth of nine consecutive home games. The homestand started poorly with a 6-2 loss to Nashville but the Wild rebounded with back-to-back wins over Boston (4-2) and Chicago (3-1).

Ryan Hartman scored the go-ahead goal off a Mats Zuccarello pass with just 3:13 to go in the third period of a physical, tight-checking game in Saturday afternoon's win over the Blackhawks. Cam Talbot finished with 21 saves.

"We liked how we played defensively and we didn't press," Minnesota coach Dean Evason said. "We had great looks, no question about that. But it wasn't going in. We didn't panic, we just stayed the course, kept doing what the Minnesota Wild do, and we were fortunate to catch a break and get one.

"That's playoff hockey," Evason added. "It's that time of year where you're not going to score easy goals, and I don't care who you're playing. This time of year, everyone is playing tight and playing responsibly. So really happy with that end of our game."

Minnesota acquired veteran forward Nicolas Deslauriers in a trade with Anaheim after the game. Deslauriers is tied for the league lead with 10 fights this season, according to hockeyfights.com, and has 41 goals and 41 assists in 486 career NHL games.

He practiced on the fourth line with Tyson Jost and Brandon Duhaime on Sunday and is expected to play Monday.