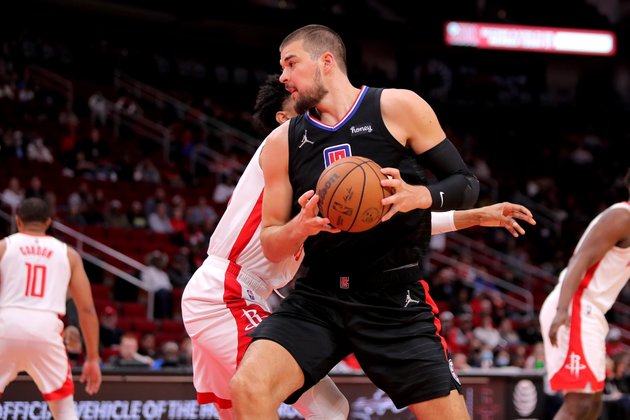 On Sunday in the first of back-to-back road contests against the Houston Rockets, Zubac made his presence felt on both ends and anchored a 99-98 victory, the Clippers' fifth win in six games. The Clippers and Rockets will meet again Tuesday night in Houston.

Zubac paired 14 points with 15 rebounds and added a career-high six blocked shots. His final swat came with the Clippers protecting a two-point lead in the waning seconds and required a challenge on the part of Lue after Zubac was whistled for fouling Houston center Christian Wood. That foul call was reversed following a review and the Clippers persevered, improving to 2-0 against the Rockets this season.

"He was dominant inside in the paint and he had like five or six verticalities at the rim that changed their shots as well," Lue said of Zubac. "I thought his play around the basket was huge for us, even on the offensive end. But defensively he really dominated the game."

The Clippers overwhelmed Houston in the paint, with Zubac making all five of his shot attempts while his backup, former Rockets center Isaiah Hartenstein, added 12 points on 6-for-7 shooting, four rebounds and two blocks in just 10 minutes. Zubac also recorded three assists and a steal.

"You're not going to play great every night but we need those guys to do big-man things," Lue said. "They've been doing it for us."

Houston, on a nine-game losing streak, will face the same challenge in attempting to lure Zubac away from the rim in the rematch. The Rockets shot effectively enough from the perimeter, making 17 of 42 3-point tries.

However, the Rockets weren't anywhere near as effective inside the arc, missing 32 of 50 shots and failing to punish the Clippers for staying connected to the rim defensively. Houston totaled only 34 points in the paint and made just 18 trips to the free-throw line, yielding the paint to Zubac and Hartenstein and ultimately the game to the Clippers.

"Him in the paint is a problem," Rockets coach Stephen Silas said of Zubac. "We either have to shoot him out of the paint or continue to ... screen whether it's J.T. (Jae'Sean Tate) or KJ (Martin) when he's guarding those guys, whether it's dribble handoffs or screens. We've got to knock down the shots. But yeah, it's tough."