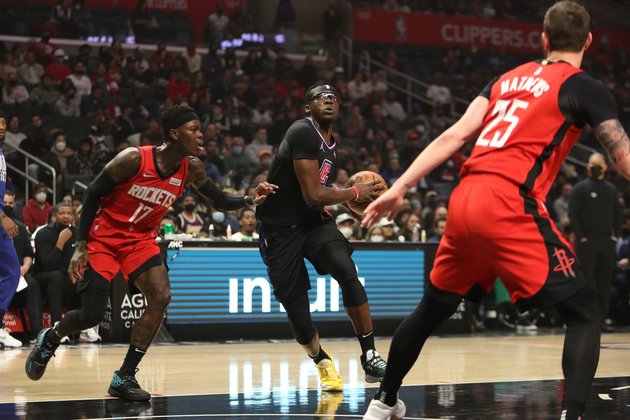 For the Los Angeles Clippers, their first game out of the All-Star Game break provided yet another example of the power behind an egalitarian approach to basketball.

The Clippers have long since grown accustomed to playing without Paul George and Kawhi Leonard, and they have endured their momentsof struggling to piecemeal together a viable rotation. It all came together Friday in the Clippers' 105-102 victory over the Los Angeles Lakers.

Seven Clippers scored in double figures in the victory, their fourth in five games following a three-game losing skid. The Clippers rallied from a late five-point deficit and can climb back above .500 with a road win against the Houston Rockets on Sunday.

"I thought our bench came in and did a helluva job," Clippers coach Tyronn Lue said. "I thought when we got down five ... we kept our poise, we kept our composure. We just kept playing. I didn't think we played particularly well ... but to keep our composure and come back and win this game, it was a big win for us, especially with our bench guys playing the way that they did."

What has become critical to the Clippers' push for a playoff berth is an ability to run the offense through multiple players. Starters Reggie Jackson and Terance Mann added six and four assists, respectively, while all four bench players produced at least two assists in the Clippers' triumph.

The Rockets, in the chase for the worst record in the NBA and potentially the top pick in the 2022 draft, dropped their eighth consecutive game Friday at Orlando, falling 119-111 to the Magic. Houston is 1-12 since last winning consecutive games in mid-January and is only one game up on the Magic and Detroit Pistons for the fewest wins in the league.

Like so many prior games this season, many of the Rockets' wounds Friday were self-inflicted. Houston shot just 29.8 percent from 3-point range and missed 11 of 20 free throws attempts, with center Christian Wood shooting just 3 of 13 from the line. The second season of a rebuild has been filled with disappointing results.

"We just had some breakdowns and stuff that went wrong," Rockets coach Stephen Silas said. "But as far as the play hard part and the commitment part ... that just shows you where we're at as far as a group and the commitment that we have to improving and dealing with disappointment because it is disappointing that we lost. But they played hard."