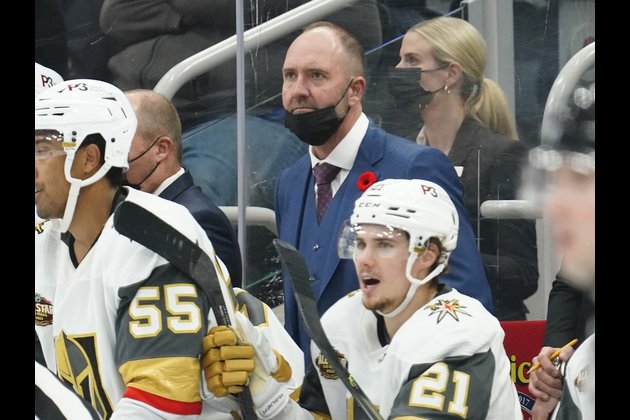 Peter DeBoer will try for his 500th NHL coaching victory on Friday night when his Vegas Golden Knights face the Arizona Coyotes in Glendale, Ariz.

"It's not something you really track or pay a lot of attention to," the 53-year-old DeBoer said when asked about reaching the milestone. "When it was brought to my attention that I was getting close, you start to think about it. You realize how quickly it's gone, how fortunate I've been, (the) great people that I've got to work with and players I've got to coach, and particularly my family and what they've had to put up with as a pro coach -- moving city to city and packing up and buying new houses, closing up old ones and changing schools.

"It's been quite a journey."

One that will get a whole lot busier in the next two months.

Vegas, which is second in the Pacific Division, one point ahead of the Los Angeles Kings and three ahead of the Edmonton Oilers and Anaheim Ducks, plays its final 31 regular-season games in a 64-day span. That includes the first of its five remaining back-to-backs starting at Arizona followed by a Saturday night home game against the Colorado Avalanche, who lead the NHL in points (78), points percentage (.765) and wins (37). After a two-day break, the Golden Knights then play seven games in 11 days.

DeBoer held only one mandatory full team practice, on Wednesday, during a week-long break before the visit to Arizona to let his team recharge for the frantic finish.

"The most important thing ... is heading into March and April healthy and fresh because it's going to be a gauntlet," DeBoer said.

Arizona, which is 6-19-1 at home, has the NHL's lowest points percentage (.294) as well as the fewest wins in the Western Conference (13). Colorado is at the other end of the standings, but DeBoer cautioned his team to not look past the Coyotes.

"I would argue they're equally as dangerous because the points mean the same," he said. "You look around the league and you see it every night -- teams beat teams that you would never expect would win those games. There are no easy nights in this league, regardless of who you're playing."

Arizona has dropped three of its past four games and 10 of its past 13, including a 3-2 loss to the visiting Kings on Wednesday. But the Coyotes did defeat Colorado 3-2 in a shootout in Denver to begin the month, took the two-time defending Stanley Cup champion Tampa Bay Lightning to the wire before losing 4-3 on Feb. 11, and handed the Dallas Stars, who are in the thick of the Western Conference playoff race, a 3-1 loss on Sunday.

Los Angeles needed a goal by Viktor Arvidsson with 3:39 remaining in the third period to beat the Coyotes on Wednesday. Clayton Keller and Barrett Hayton scored for Arizona, and Scott Wedgewood made 32 saves.

"There was a lot of back and forth," said Keller, who has a career-best four-game goal-scoring streak. "(Wedgewood) played awesome tonight, made a lot of key saves for us and kept us in the game."