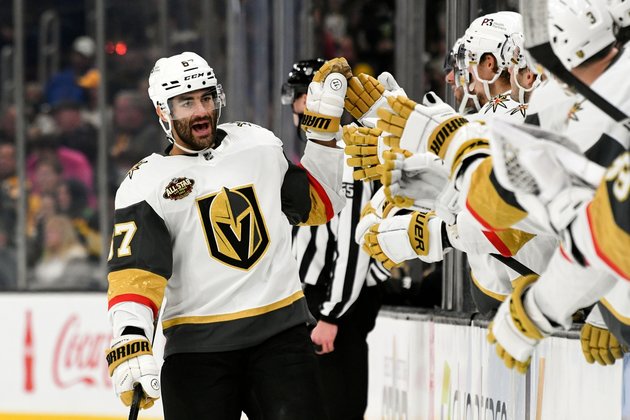 With his team amid a three-game losing streak and in a surprising challenge for the top spot in the Pacific Division, Vegas Golden Knights coach Peter DeBoer wants his team to play with hunger and desperation heading into Sunday night's game at San Jose.

The Golden Knights were heavy favorites to not only win the division but also to contend for the Stanley Cup. Following a 4-3 overtime loss at home to the Los Angeles Kings on Friday, second-place Vegas finds enters Saturday just five points ahead of the fifth-place Anaheim Ducks in the bunched-up division.

An added challenge is that the Golden Knights play 19 of their final 32 games on the road.

Vegas blew an early 2-0 first-period lead against the Kings and led 3-2 in the second period after a second Max Pacioretty goal. Los Angeles, which outshot the Golden Knights 11-5 in a scoreless third period, won it in overtime on Adrian Kempe's second goal of the game.

"I didn't love our night," DeBoer said. "I thought we were fortunate to be up two in the first. They were probably better than us. We did some good things. We found a way to scrape a point out, but it wasn't our finest effort in my mind."

DeBoer didn't mince words when asked what his team needed to do be better defensively.

"They (the Kings) were hungrier," DeBoer said. "It's one thing to be in defensive position, it's another to lose all the puck battles. I think we've got to get used to the fact that we're in the middle of a race here for positioning to the finish line and that everybody we're playing has that hunger that you've got to bring if you're going to win games this time of year."

San Jose enters in seventh place in the Pacific and just 11 points behind the Golden Knights.

"Another division game against another really hungry team," DeBoer said. "We can't underestimate how desperate that they're going to be where they're sitting in the standings. I think that's the key takeaway here. ... You're getting everybody's best game and we can't be casual about the situation."

San Jose is in danger of missing the playoffs for a third straight year, which would be a first in franchise history.

The Sharks have lost five straight (0-2-3) but managed to earn a point in their last game, a 5-4 overtime loss to the visiting Vancouver Canucks on Thursday, thanks to Alexander Barabanov's game-tying goal with 0.6 seconds remaining in regulation.

Barabanov finished with a goal and two assists while Timo Meier had two goals and an assist to give him a team-best 23 goals and 50 points.

"All I care about is the team's points, and we've got to get some wins here," said Meier. "Tonight we got a point, but in the last few games we didn't play our best, so we've got to start now or else it's going to be a long, long season."