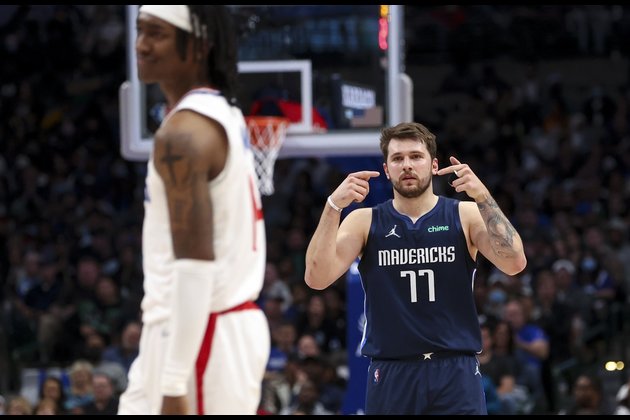 The Dallas Mavericks may have changed course by trading Kristaps Porzingis to the Washington Wizards, but their primary route still runs through star Luka Doncic.

The Mavericks will conclude a two-game set against the visiting Los Angeles Clippers on Saturday after Doncic dominated the first matchup.

The All-Star scored 28 of his career-high 51 points in the first quarter in Dallas' 112-105 win over the Clippers, who have lost four of their last five games.

Dallas has won four straight and is 17-5 over its last 22 games. The team made a surprising move at Thursday's trade deadline by sending Porzingis to Washington for Spencer Dinwiddie, Davis Bertans and a second-round pick.

The Mavericks thought they had found a true partner for Doncic when they acquired Porzingis from the New York Knicks in 2019. Unfortunately, the 7-foot-3 center was often injured and only played in 134 games over the past three seasons.

With the experiment over, Dallas now faces an uncertain future without a proven second star.

"I'm the coach who has to put them in a position to be successful, get paid, find a way to win," Dallas coach Jason Kidd said. "As we go through this journey, we'll see if we come across a No. 2 guy. It could be the team that we have where there is no real second star. You've just got guys who play roles at a very high level. And you've seen teams win championships that way, too."

Dinwiddie and Bertans are expected to be available Saturday against the Clippers, who made the mistake of not double-teaming Doncic until the second half on Thursday.

Doncic has averaged 30.2 points in 11 career games against the Clippers, his highest scoring average against any Western Conference opponent.

"Well, tonight was just Luka," Clippers coach Tyronn Lue said Thursday. "That little step-back 3, I'll live with that. That's his shot, but if he misses a couple or few of those, then the game is different. But he made them, and that's why he's a great player."

Marcus Morris Sr. scored 21 points in Thursday's contest while Norman Powell added 19. Powell has played well since being acquired from the Portland Trail Blazers, averaging 21 points and four assists over his past three games while shooting 47.6 percent from the field.

Reggie Jackson scored 18 points on Thursday while serving as the team's starting point guard. The Clippers could use another ball handler after trading Eric Bledsoe last week, and there's a chance they'll be active in the buyout market.

The Clippers made one move at the trade deadline, sending center Serge Ibaka to the Milwaukee Bucks and receiving wing Rodney Hood and forward Semi Ojeleye as part of a four-team deal. Both those players are expected to be available Friday in limited roles.

"Can't really call stuff to run because they really haven't been here long enough," Lue said. "But we'll get that done."

Ibaka's departure helps clear the team's logjam at center, where the 13-year veteran was sharing time with Ivica Zubac and Isaiah Hartenstein.