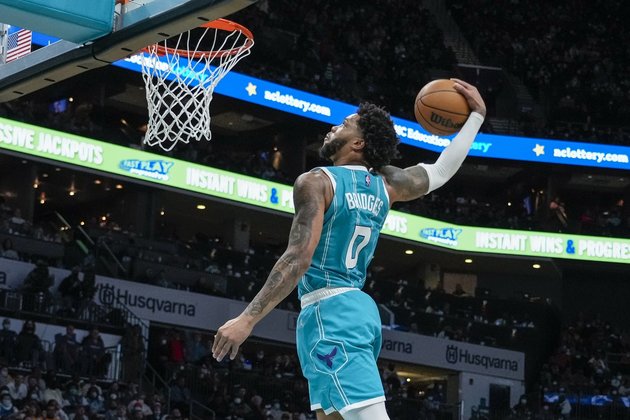 There are plenty of ways to come out on top in NBA games.

Charlotte Hornets coach James Borrego just wants to make sure his team figures out one of those methods each time out.

After a riveting result Friday night, the Hornets will be back at it for Sunday afternoon's home game against the LosAngeles Clippers.

"Some nights, it's going to be pretty. Some nights, it's not," Borrego said. "Sometimes, you're coming back and sometimes you're holding onto leads. There's a thousand ways to win an NBA game."

The Hornets saw a 20-point lead in the third quarter disappear before the end of the period Friday night. Then they regrouped and held off the Los Angeles Lakers for a 117-114 victory. This came after posting a team-record 158 points in the previous game.

It's a two-game winning streak for the Hornets, who've won nine of their last 12 games.

The key for the Hornets will be to avoid another troubling home loss. They've dropped home games the past couple of weeks to the Orlando Magic and Atlanta Hawks. The Clippers are another sub-.500 team coming to Charlotte.

Sunday's contest will be the seventh stop on an eight-game road trip for the Clippers, who are 3-3 so far. They're coming off Friday night's 121-114 loss at Miami.

The trip has been highlighted by a comeback from 35 points down to defeat the Washington Wizards on Tuesday. The Clippers faced a 23-point hole in Miami and closed the gap to four, but facing these huge uphill climbs is not ideal.

"We always give ourselves a chance, no matter what," Clippers guard Luke Kennard said. "We can't dig ourselves in a hole that early in the game. We always believe, but it's tough getting down that much in games. It wears us down."

Kennard's 23 points for the Clippers on Friday marked the team's fifth different leading scorer in a seven-game stretch.

Coach Tyronn Lue said the wide swings in games aren't something that's sustainable for a turnaround to the season.

"We don't want to keep getting down, for sure," Lue said.

The injury problems are stacking up on the Hornets, who've been without Gordon Hayward (ankle) for the past week. They didn't have Kelly Oubre Jr. on the court Friday night because of an ankle ailment. Oubre hasn't played since racking up 39 points Wednesday night.

Yet the depth showed for Charlotte, which picked up 22 points from reserve guard Ish Smith on Friday.

"We've got a lot of vets in our locker room, and Ish is one of those vets," forward Miles Bridges said. "He did a great job of staying ready, and he hasn't been playing that much."

With a backcourt that features LaMelo Ball, Terry Rozier and Oubre, it's understandable how Smith could get lost in the shuffle.

"Anytime you can get a win in the NBA, it's huge," Smith said. "I was just coming in and bringing the energy and the juice."