Familiar foes Rams, Cardinals have something to prove in playoffs 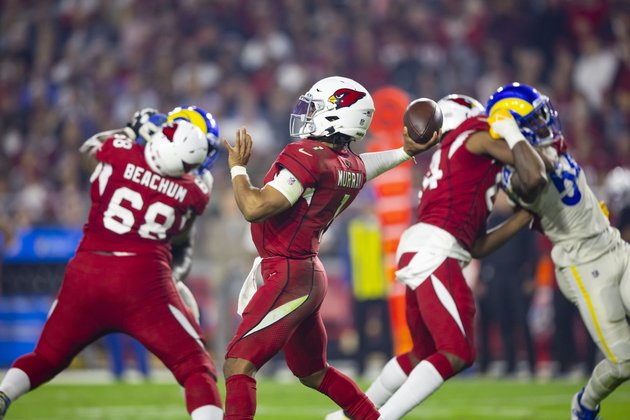 While the Los Angeles Rams will play host to the first-ever Monday night playoff game, it is the Arizona Cardinals who are feeling completely familiar with the lead-up to the all-NFC West wild-card-round matchup.

The Rams-Cardinals primetime showdown will be the third meeting between the teams, with the road team having won the previous two.

And while the Rams prevailed in a Monday night meeting at Arizona in December, it was the Cardinals who pronounced themselves playoff-worthy with a Week 4 victory at Los Angeles in early October.

Defeats in four of their last five games cost the Cardinals an NFC West title and left them with something to prove Monday. But that was also the case in Week 4, when they arrived in Los Angeles on the heels of three consecutive wins to start the season amid questions of whether their hot start was sustainable.

The Cardinals not only delivered a resounding 37-20 victory over the Rams that day, behind two touchdown passes from Kyler Murray and 120 yards rushing from Chase Edmonds, but they went on to open the season 7-0.

Having gone 4-6 since that undefeated start, the Cardinals are once again having to prove that their time has arrived.

"It's 0-0, and no one remembers the regular season," Cardinals coach Kliff Kingsbury said. "It's what you do here on out, and it's a real opportunity for us to take the next step and see how good we can be."

The game will not only be Murray's playoff debut, but it will be the Cardinals' first appearance in the playoffs since 2015-16, when they defeated the Green Bay Packers in the divisional round but were blown out by the Carolina Panthers in the NFC Championship Game.

Murray averaged 270.5 yards passing per game this season with 24 TDs and 10 interceptions. He had 383 yards passing in Week 14 against the Rams but did not throw a TD pass that day and was intercepted twice in a 30-23 Los Angeles victory.

"I like that we had two games to see how we played them, how they played us and what looked good and didn't," Kingsbury said. "So we can build off that."

The Rams had a hot start of their own, despite their early loss to the Cardinals, opening with a 7-1 record. Then came a midseason slumber when they took consecutive defeats to a trio of playoff teams, the Tennessee Titans, the San Francisco 49ers and the Packers.

The Rams were just 2-5 against playoff teams this season.

After their midseason swoon, the Rams pulled together a five-game winning streak that included their victory at Arizona, but questions started anew after their 27-24 defeat in overtime to the 49ers to close out the season. The Rams blew a 17-0, first-half lead.

Los Angeles' offensive and defensive lines were dominated by the 49ers in the season finale, especially in the second half as San Francisco rallied.

"Whether we're playing at home, playing on the road, things are going our way, things aren't going our way, we continue to battle," said Stafford, who has not won a playoff game in three chances. "That's what it takes to win games in the playoffs, there's no question. Right now, it's testing us ... but we're a resilient group and we'll be ready to go."

With Rams safety Jordan Fuller out for the playoffs with an ankle injury and fellow safety Taylor Rapp in concussion protocol, the Rams signed Eric Weddle out of retirement Wednesday. Linebacker Leonard Floyd (back) is expected to play but was listed "out" for Thursday's walkthrough.

Cardinals defensive end J.J. Watt (shoulder), who hasn't played since Week 7, returned to practice Thursday but was extremely limited. Edmonds (ribs, toe) was limited but said he was prepared to play, while fellow running back James Conner (ribs) did not practice and will be a game-time decision.