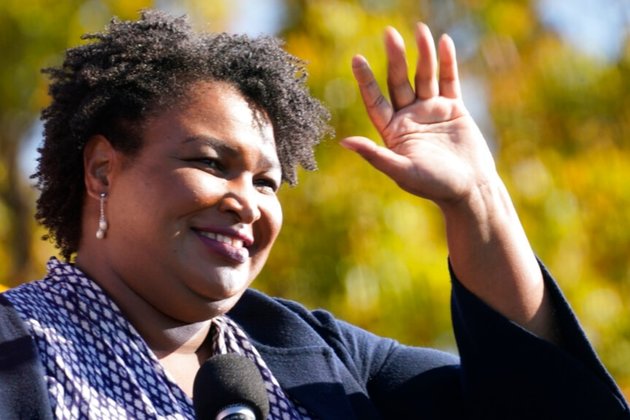 If she receives her party's nomination, Abrams could again face off against Republican Brian Kemp, the current governor. Their 2018 contest was one of the most narrowly decided races for governor that year and was dominated by allegations of voter suppression, which Kemp denied.

Yet Abrams' strong showing convinced national Democrats that Georgia should no longer be written off as a GOP stronghold. Her performance and subsequent organization persuaded Joe Biden to invest heavily in the state in 2020, and he became the first Democratic presidential candidate to capture it since 1992. The party later won a narrow Senate majority after victories in two special elections in the state.

The 2022 governor's race will test whether those gains were a one-time phenomenon driven by discomfort with then-President Donald Trump or marked the beginning of a more consequential political shift in a rapidly growing and diversifying South.

'Fight for one Georgia'

In a video announcing her candidacy, Abrams said 'opportunity and success in Georgia shouldn't be determined by background or access to power.'

Abrams said she would provide 'leadership that knows how to do the job, leadership that doesn't take credit without also taking responsibility, leadership that understands the true pain that folks are feeling and has real plans. That's the job of governor, to fight for one Georgia, our Georgia.'

FILE - Georgia Gov. Brian Kemp listens to a reporter's question at the Georgia World Congress Center on April 16, 2020, in Atlanta.

Kemp said in a statement that Abrams was on a 'never-ending campaign for power' in an attempt to become president, linking her to what he said was the 'failed Biden agenda.'

'Her far-left agenda of open borders, gun confiscation, high taxes and anti-law enforcement policies don't reflect who we are as Georgians,' Kemp said.

In a state where Democrats often sought - and failed - to win power by relying on Black voters and appealing to older white moderates, Abrams ran in 2018 as an unapologetic progressive. The 47-year-old Abrams embraced expanding Medicaid access, something a series of Republican governors have refused to do, and she supported abortion rights.

Although Kemp defeated her by 1.4 percentage points, Abrams won 778,000 more votes than the previous Democrat to run for governor.

After the election, Abrams started Fair Fight, an organizing group that has raised more than $100 million and built a statewide political operation that registered hundreds of thousands of new voters in Georgia. The state saw record-breaking turnout in the 2020 presidential race and January Senate runoff elections.

Now, Abrams and Kemp look like they may face a rematch in a new political climate. For one, Kemp faces opposition from Trump and his most loyal GOP supporters for not supporting the former president's baseless argument that he was cheated out of reelection through massive voter fraud, including in Georgia. Election officials conducted three recounts in the state, each of which affirmed Biden's victory.

Trump, who campaigned for Kemp in 2018, is now one of the governor's most vocal critics, pointedly inviting former U.S. Senator David Perdue to run against Kemp.

Kemp's disavowal of problems in Georgia's election results did not stop him from pushing through restrictive changes to voting laws in response to Trump's 2020 national defeat. Many Democrats are worried that Georgia's new law, which gives the GOP-controlled legislature more control over elections officials, will reverse Abrams' years of fighting voter suppression. Still other Democrats hope the new voting law will invigorate supporters and make them even more determined to go to the polls.

Abrams has used voting concerns to mobilize Democrats, telling The Associated Press in April that 'Republicans are gaming the system because they're afraid of losing an election.'

Republicans, meanwhile, have tried to gain an upper hand by using the prospect of an Abrams candidacy to galvanize its voters. Earlier this year, Kemp allies preemptively formed a group called Stop Stacey, aimed specifically at stopping her from winning the governorship in 2022.