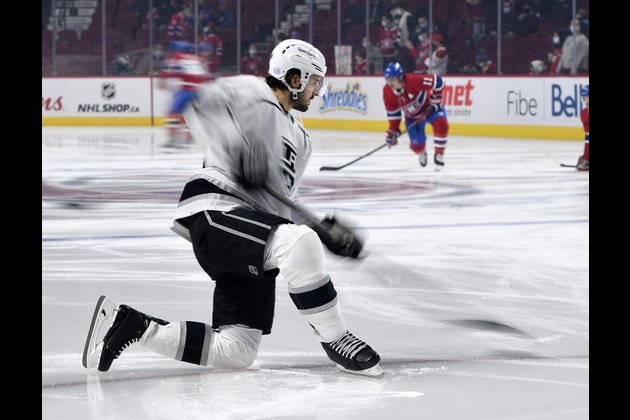 The Los Angeles Kings open a seven-game homestand Wednesday night against the Washington Capitals on the heels of a very successful four-game road trip.

Despite losing Saturday in overtime to the Winnipeg Jets, the Kings finished 3-0-1 and extended their point streak to eight games (7-0-1).

Los Angeles has turned its season around after losing six straight -- four by one goal -- early on.

"Obviously we struggled a little bit at the beginning of the year to find our game as a team, and then we definitely found it," forward Phillip Danault said. "Everyone wants to be the difference-maker every night, and that's been the difference."

The Kings have 11 players with two or more goals, led by Anze Kopitar, who has eight to go with eight assists. Meanwhile, the Kings have allowed three goals or fewer in 10 straight games.

In the road trip finale, the Kings took a 2-1 lead into the third period before losing 3-2. Carl Grundstrom and Brendan Lemieux scored, and Cal Petersen made 20 saves.

"It feels like a loss, but in the grand scheme of things, we definitely see this trip as a win," Lemieux said. "We got back to playing road hockey the way that we should. We made some strides with our team that I think we're definitely going to remember for the rest of the year, and we've got a good foundation to build a successful, hopefully playoff, hockey team."

The Washington Capitals saw their four-game winning streak end with a 3-2 overtime loss to the Anaheim Ducks in the opener of a four-game road trip Tuesday night.

Tom Wilson scored with 2:32 left in the third period to force overtime and Garrett Pilon, recalled from Hershey of the American League earlier in the day, scored his first NHL goal. Wilson has four points (two goals, two assists) in his past three games.

"We've got to come out hard and leave everything out there, and then try to recover and come back the next day and just keep building off those games," Capitals defenseman Nick Jensen said of embarking on the trip. "It's definitely going to be a good test against those teams out West there that are pretty good."

Forward Lars Eller entered COVID-19 protocol Tuesday, meaning Washington is without three of its four usual centers. With the addition of Pilon, the Capitals have six rookies in their lineup.

Injured forwards Nic Dowd and T.J. Oshie are traveling with the team and could return to the lineup during the trip.

Alex Ovechkin did not register a point Tuesday, snapping a four-game point streak. It was just the third time this season that Ovechkin failed to make the scoresheet, and he enters Wednesday with 26 points (12 goals, 14 assists) in 16 games.

"We know his shot is devastating," Danault said. "They can strike really quick, so we've got to play a good 60 minutes."

Vitek Vanecek started against the Ducks, meaning Ilya Samsonov likely will be in net vs. the Kings.