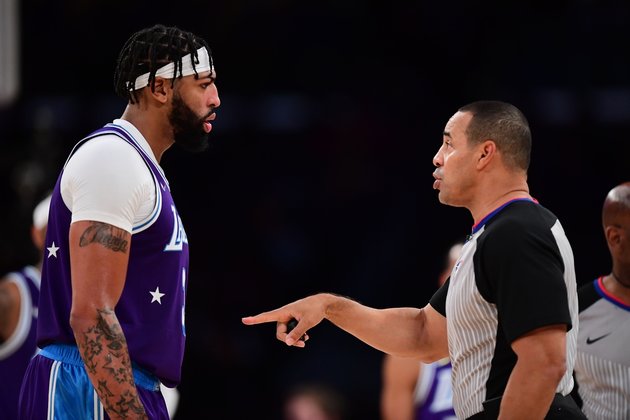 The Los Angeles Lakers will be looking to rebound from a head-scratching blowout loss when they host the enigmatic San Antonio Spurs on Sunday in a matchup of two of the league's most perplexing teams.

The Lakers' most recent game was a 107-83 home defeat to Minnesota in which Los Angeles scoredjust 34 points in the second half. LeBron James missed the game with an abdominal strain -- the Lakers are 3-4 this season when James has not played.

Anthony Davis led the Lakers with 22 points and eight rebounds, with Russell Westbrook adding 20 points and Dwight Howard pulling down 10 rebounds off the bench.

Los Angeles was outscored 40-12 in the third period, when it saw a five-point halftime lead turn into a 24-point deficit. It was the Lakers' lowest-scoring quarter of the season.

"We just had no effort in the third quarter," Davis said. "We're not going to win a championship the way we're playing -- that's not us right now. We have to be better, and we've got to decide who we want to be."

Minnesota had dropped six straight games before surprising the Lakers.

"We just got to be just locked in regardless of who we're playing," Westbrook said. "Our opponent don't really matter. It's just more about us. We got to do a good job of kind of locking in on what we do and then let the results speak for itself."

The Spurs head to Los Angeles after a poor showing in a 123-109 home loss to Dallas on Friday. After playing so well in a win over Sacramento on Wednesday, San Antonio regressed against the Mavericks, showing little of the mental toughness and defense for which it's been known.

Spurs coach Gregg Popovich said it's not the first time this season that his team has not followed up a big win with another consistent performance.

"It's really the first or second time they've been disappointing in that regard where we didn't play the usual move-the-basketball type play," Popovich explained. "I think we created one turnover in the first half, so the mental toughness is something that has to be understood and acted upon. We need that.

"To me, it's a mental toughness exercise where you just have to realize that everybody has to bring it every single night," he added. "You can't get satisfied because you won a game, and the next game is going to be the same way. You have to bring it. Our physicality was lacking (against Dallas)."

Devin Vassell led the Spurs with 20 points in the loss to Dallas, with Keldon Johnson and Dejounte Murray scoring 15 each, Doug McDermott hitting for 14 points, Drew Eubanks scoring 12 and Lonnie Walker IV tallying 10 for San Antonio.

"We came out flat -- I think we get complacent over a win," Vassell said. "We're a young group, but we still got (veterans), so it's not really an excuse no more. It's not the first or second game. We're done playing games now. We've got to clean it up. We'll put this one behind us, but we've got to clean it up."

Los Angeles beat the Spurs 125-121 in overtime in San Antonio on Oct. 26 in one of the three games the Lakers have won this season without James.