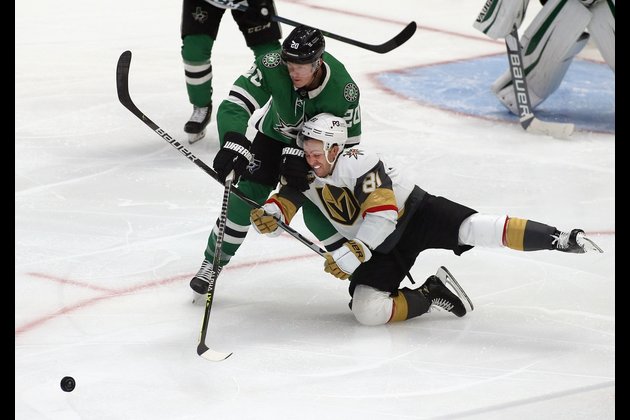 The Vegas Golden Knights will go for their fourth straight win Tuesday night when they play the Toronto Maple Leafs to open a four-game trip.

The winning streak follows a 1-4 start to the season.

"This was a huge week for us," Golden Knights coach Peter DeBoer said after a 5-4 shootout victoryover the Anaheim Ducks on Friday. "We were staring at an absolutely potentially disastrous start instead of just a bad start, and I thought guys have dug deep all week to get us back to .500."

The Golden Knights outshot the Ducks 21-8 in the first period but led only 1-0. They took a 4-1 lead in the third period, but Anaheim scored three straight goals.

"It was a crime we weren't up by more than one early, and I think that was a mistake," DeBoer said. "We ran out of a little bit of gas and lost some momentum there -- ut I know that will get better -- and then found a way to get off the mat."

Nicolas Roy and Evgenii Dadonov scored in the shootout for Vegas, and goaltender Robin Lehner stopped three of four attempts.

"I think as a team that wants to make the playoffs and go far, you can't let a team come back in a game when you're up 4-1 and 4-2," said Vegas center Jonathan Marchessault, who had two assists Friday. "It's disappointing, but for us, what's happening right now, we'll take the win at that point."

The Maple Leafs, who defeated the Detroit Red Wings 5-4 Saturday in the opener of a five-game homestand, have won two in a row after dropping four straight.

"We need to get results, and we've had some games early in the season where we've played really well and didn't get results, and those don't feel very good," Maple Leafs coach Sheldon Keefe said. "So getting results is good for sure, but as we see how that third period goes with them continuing to get back in the game, continue to push, that's not nearly good enough."

Mitchell Marner scored his first goal of the season for Toronto, and goaltender Petr Mrazek returned from a groin injury to stop 27 shots against the Wings.

The Maple Leafs, who have been hampered by slow starts this season, had a strong first period against Detroit but could not open more than a two-goal lead.

"The main part is we just haven't had the lead late in games enough this season," Keefe said. "We have more than enough experience that we should be better than that. Getting comfortable with a lead is a staple of a good hockey team."

"We're building towards something and we're not there yet," said Toronto center Alexander Kerfoot, who had a goal and an assist Saturday. "We showed (Saturday) it's not clean enough; we have to close out games better. We've given up a lot of easy opportunities; we have to get back to where we're not cheating for offense."