Shorthanded Clippers hope to get right vs. youthful Thunder 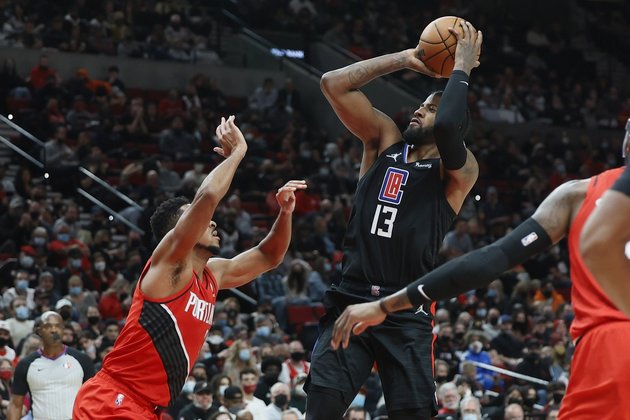 Two teams looking to get their season back on the right track meet on Monday as the Los Angeles Clippers host the Oklahoma City Thunder at the Staples Center.

Expected to make a deep playoff run in the West, the Clippers appear mired in mud this season at 1-4, including a 111-92 loss on the roadto the Portland Trail Blazers on Friday.

With star Kawhi Leonard out for an indefinite period as he recovers from ACL knee surgery -- along with Marcus Morris Sr. (knee) and Serge Ibaka (back) unavailable -- the Clippers have struggled to generate consistent scoring on offense.

"We can't wear him down," Clipper head coach Tyronn Lue said about George. "We can't expect him to get 40 every night for us to win games. We've got to do a better job helping him out, and for other guys to make the right plays. We're not making shots."

The Clippers also are struggling on the boards. The Clippers were outrebounded by 20 in the loss against the Trail Blazers on Friday and 21 earlier last week in a humbling, 13-point loss to the Cleveland Cavaliers in which they scored just 79 points.

Even with his team's struggles offensively and on the glass, Lue remains optimistic.

"Guys have been playing hard and competing, so I can't fault that," Lue said. "I have got to do a better job just to make sure that we're putting our guys in position to be successful, and so we've just got to keep plugging away until I do that."

In the middle of a rebuilding effort, the youthful Thunder have lost by an average of 19 points a contest in their five losses this season. Even worse than the Clippers, the Thunder are shooting a dismal 41.6 percent (28th in the NBA) from the floor and 29 percent (29th) from beyond the arc.

Shai Gilgeous-Alexander has been one of the few bright spots for Oklahoma City. The 6-6 guard is averaging 22 points, 4.8 rebounds and 3.8 assists a contest for the 1-5 Thunder.

In the middle of a three-game road swing, the Thunder take on the Los Angeles Lakers on Thursday before returning to Oklahoma City to host the San Antonio Spurs on Sunday.

The latest loss for the Thunder was a 103-82 setback at the Chase Center to the Golden State Warriors on Saturday in a game Oklahoma City led at halftime.

"I think the lesson there is when shots are not falling, we've got to find grimier ways to try and generate points," Oklahoma City head coach Mark Daigneault said. "We've got to hit the paint more. We've got to get to the line more. Sometimes you've just got to kind of grind out offense. And I thought there were opportunities tonight (vs. the Warriors) that we didn't take advantage of."