Yankees' Anthony Rizzo powers up again in win over Marlins 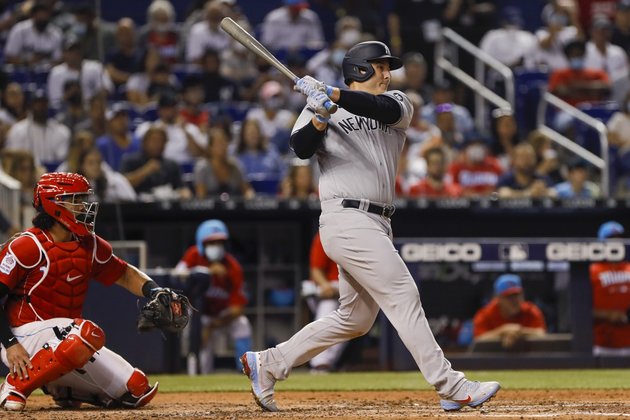 Anthony Rizzo homered for the second game in a row, leading the New York Yankees to a 4-2 win over the host Miami Marlins on Saturday night.

Miami was without manager Don Mattingly, who tested positive for COVID-19 on Saturday and has mild symptoms. He was replaced by bench coach James Rowson.

Rizzo, acquired from the Chicago Cubs on Thursday, went 2-for-2 with three runs scored, two walks, one hit-by-pitch and one RBI.

Yankees starter Domingo German pitched fairly well - he allowed two runs in four innings - but he got a no-decision when he was removed for a pinch hitter.

Reliever Lucas Luetge (4-1) earned the win, pitching two scoreless innings. Jonathan Loaisiga pitched a scoreless ninth for his third save of the year.

Marlins starter Trevor Rogers, who hadn't pitched since July 20 due to back spasms, came off the injured list and also got a no-decision. Rogers, who allowed two runs in 3 2/3 innings, hasn't won since June 10. The All-Star and Rookie of the Year candidate is 0-3 with four no-decisions since then.

The loss went to David Hess (2-1), who was charged with one run in one inning.

New York opened the scoring in the second with a rally that started when Rizzo was hit on his left hand by a 95-mph fastball.

Giancarlo Stanton then drove a 117-mph rocket that bounced off the top of the wall in left for a double. Rougned Odor followed with hard-hit RBI single, and Gary Sanchez's ground-rule double to the right field corner gave the Yankees a 2-0 lead.

Miami, which had been held hitless through the first three innings, tied the score in the fourth.

Miguel Rojas singled and scored when Jorge Alfaro scorched a 114-mph triple off the wall in left-center. With an 0-2 count on Bryan De La Cruz, German unleashed a high, 95-mph fastball that eluded catcher Sanchez, hitting umpire Larry Vanover flush on his mask and allowing Alfaro to score.

In the fifth, with two outs and two on, Miami forced a decision from Yankees manager Aaron Boone by intentionally walking Tyler Wade to get to German. Boone removed German for a pinch hitter and sort of won the battle as reliever Anthony Bender threw a wild pitch with Gio Urshela at the plate. The pitch was low but catchable, bouncing off Alfaro's backhand attempt.

Rizzo's 410-foot homer in the seventh gave New York a 4-2 lead. Rizzo's two homers as a Yankees player have traveled a combined 859 feet.