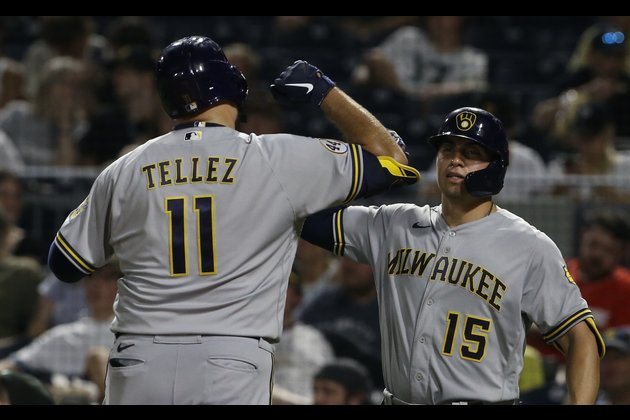 The Milwaukee Brewers' pitching staff will try to cool off Braves slugger Austin Riley during a three-game weekend series that begins Friday in Atlanta.

Riley went 2-for-4 with a home run and three RBIs on Thursday in the Braves' 6-3 road win over the New York Mets. He has homered six times in the past seven games and has a career-high 21 long balls on the year.

Riley extended his hitting streak to eight games, during which he is 14-for-32 (.438) with nine extra-base hits and 13 RBIs. He drove in 10 runs in the five-game series at New York.

"It's been nice," Riley sad. "My swing feels really good right now. I'll hone in my approach and continue to go at it."

Milwaukee has won five of its past six and leads the National League Central by seven games. The Brewers just swept a three-game series against the Pittsburgh Pirates, capped by a 12-0 victory Thursday night.

The third-place Braves, who return home after a 5-4 road trip, trail the first-place Mets by four games in the NL East.

The Braves and Brewers met in mid-May, with the Atlanta taking two of three at Milwaukee.

"We're four games out ... with our struggles and ups and downs, we're right there," Atlanta manager Brian Snitker said. "If we can weather the storm for the next week or two, we'll get some guys back. We're hanging in there."

The series features two of the top pitching staffs in baseball. Milwaukee owns the majors' best ERA since the All-Star break, 2.05, while Atlanta is second 3.00.

Burnes, a first-time All-Star this year, beat the Chicago White Sox in his latest outing, allowing one run in six innings Saturday during a 6-1 victory. Over his past nine starts, he is 4-0 with a 1.94 ERA.

Burnes has made three career appearances against the Braves, all in relief. He allowed nine runs in 2 2/3 innings during those outings but earned a win.

Toussaint will make his third start of the season since being activated from the 60-day injured list after recovering from a right shoulder strain. He allowed one run in 6 2/3 innings in his 2021 debut against the San Diego Padres, then yielded one run in seven innings while fanning 10 against the Philadelphia Phillies on Sunday.

Toussaint has made two appearances against the Brewers in his career, both out of the bullpen, posting a 7.71 ERA in 2 1/3 innings.

The Brewers are dealing with COVID-19 issues. Outfielder Christian Yelich went on the COVID list Tuesday and will be out for at least 10 days. Utility player Jace Peterson is also sidelined because of contact tracing.

Slugging infielder Eduardo Escobar is expected to join the Brewers this weekend after being acquired Wednesday in a trade from the Arizona Diamondbacks. He has 22 home runs and a .478 slugging percentage this year.