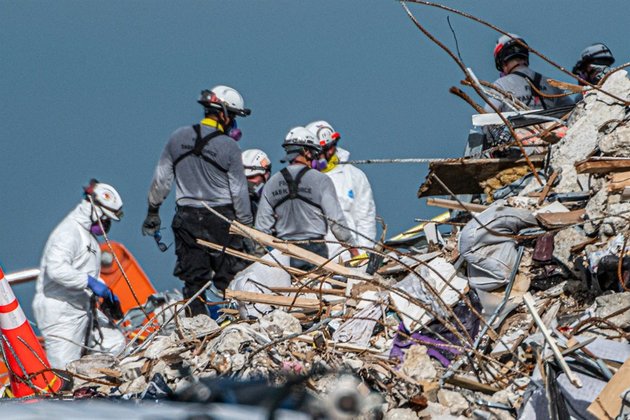 The Miami-Dade County fire and rescue department on Friday declared an end to its search for human remains in the rubble of a Florida condominium tower that collapsed on 24 June, killing at least 97 people.

Authorities said one victim was still believed to be unaccounted for. The Miami-Dade Police Department will continue to sift through what is left of the debris pile for additional remains and personal effects, officials said in a statement.

The fire department's round-the-clock operation at the beachfront site of the Champlain Towers South condo, in the Miami suburb of Surfside, was demobilized four weeks and a day after the 40-year-old, 12-story structure gave way at about 01:30 as residents slept.

"At this step in the recovery process it has become increasingly challenging to identify victims, and we are relying heavily on the work of the medical examiner's office and the scientific, technical process of identifying human remains," Miami-Dade Mayor Daniella Levine Cava said in a statement.

She hailed members of the search and recovery teams as "true superheroes."

No one has been pulled alive from the mounds of pulverized concrete, splintered lumber and twisted metal since the early hours after the collapse, and authorities formally gave up hope of finding any survivors on 7 July.

County officials said in a statement that the confirmed death toll stands at 97 - 96 victims whose remains were recovered from the wreckage and one victim who died while hospitalised.

"We believe there is one victim still unaccounted for," the statement said. It was not made clear whether the individual's remains had not been recovered or whether positive identification had yet to be made.

Investigators have yet to determine what caused about half of the 136-unit high rise to cave in on itself in one of the deadliest building collapses in US history. The portion of the structure that was left standing, but unstable, was deliberately demolished about 10 days later.

A 2018 engineering report found structural deficiencies that are now the focus of several inquiries, including a grand jury investigation.

The disaster has prompted officials across South Florida to study residential buildings for signs of poor construction or structural weaknesses.

In a ceremony marking the end of the fire department's role in the search, recovery team members rode in a procession of emergency vehicles across the causeway over Biscayne Bay into Miami, greeted by a fire boat water-cannon salute.

"Providing closure to families was the ultimate test of everybody here," Scott Dean, leader of one of the two task forces that worked in 12-hour shifts at the disaster site, said at a welcome-home gathering at Fire and Rescue headquarters.

Fire Chief Alan Cominsky said: "I couldn't be prouder of the men and women that represent Miami-Dade Fire Rescue."