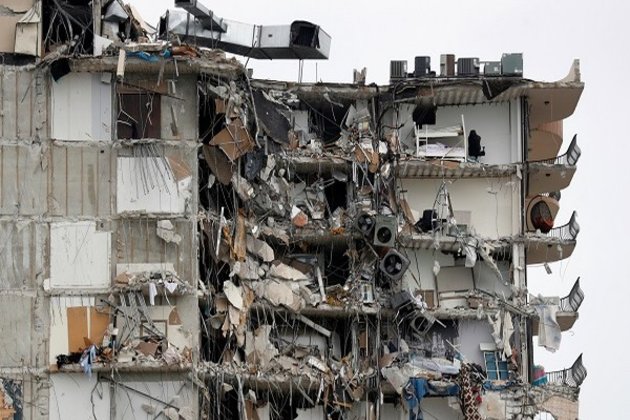 Florida [US], July 7 (ANI): With the recovery of 10 more bodies, the death toll of an oceanfront condo building in Surfside has risen to 46, informed Florida authorities.

The Hill quoting Miami-Dade County Mayor Daniella Levine Cava said that 109 people are still unaccounted for in the building that collapsed nearly two weeks ago.

Parts of Florida and the Southeast are in line for heavy rain and strong winds as Elsa sweeps north from Cuba over the next several days.

The National Hurricane Center issued a hurricane warning for parts of the Florida Gulf Coast on Tuesday afternoon.

Flooding and the "potential for a few tornadoes" also could complicate the rescue effort. Miami has seen more than three inches of rain since Monday, the Washington Post reported.

It further reported that the search efforts were halted at 1 am Tuesday (local time) because of the wind, said Miami-Dade County Fire Rescue, Chief Alan Cominsky. The chief added that rescuers, who had to pump water out of the garage of what remains of the building, are looking into different strategies for how to move forward in a rescue operation that has removed 5 million pounds of concrete since June 24.

The cause of the collapse is still unknown. However, new details are emerging about the integrity of the structure noted in an engineering report in 2018.

Experts who have reviewed available data about collapse say probe into its cause should focus on potential failures near the base of the building. (ANI)