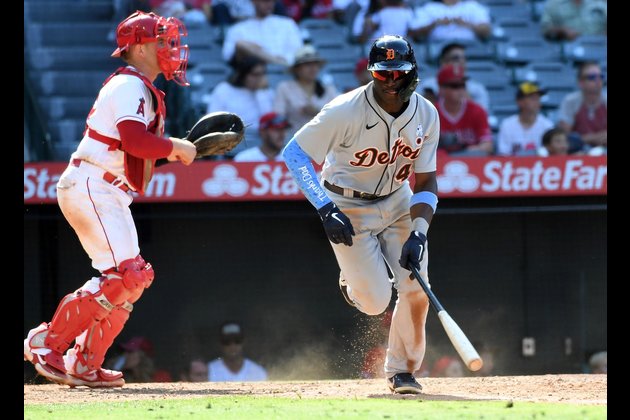 The Detroit Tigers' road trip last week took a lot of twists and turns. When it was through, the Tigers wound up winning four of seven games.

They return home to face St. Louis in a two-game series, beginning on Tuesday.

A visit to Kansas City produced a three-game sweep but they dropped theirnext three games to the Los Angeles Angels before pulling out a 5-3, 10-inning victory on Sunday.

"Winning road trips is key, especially with how we started out," Tigers manager A.J. Hinch said. "We played very well in Kansas City and then came (to Anaheim) and didn't play as well. We get to salvage one game and go home with a winning road trip. It's one of the things we preach over and over, is find a way to have a winning homestand and to win road trips. We're inching toward having those things more consistently."

Rookie center fielder Daz Cameron led the offense the last two games. He hit his second career homer and had an RBI single on Saturday, then delivered a two-run, go-ahead single in the 10th inning on Sunday.

Cameron had struck out in his previous three at-bats before his hit up the middle against Angels closer Raisel Iglesias.

"Daz has a short memory," Hinch said. "One thing I've noticed about him is he's pretty much the same version of himself after success and failure. He doesn't get too high or too low. It's a great attribute for him to have and I don't think he carries a lot of garbage with him to the next time up."

Like any other manager, Hinch has concerns regarding the crackdown on illegal substances used by pitchers. The Tigers and Cardinals pitchers will be subject to umpire inspections for the first time.

"The interpretation of what is sticky and what is not sticky and where rosin can and can't go, I don't think anybody really knows," he said. "It's going to have to be trial and error. The problem with errors causes a lot of accusations of cheating."

Left-hander Tarik Skubal will start for Detroit on Tuesday. Skubal (4-7, 4.36 ERA) has three wins and a no-decision in his last four outings, allowing just seven earned runs in 23 innings during that span. He's also recorded 50 strikeouts in his last six starts.

He'll be opposed by another rookie, right-hander Johan Oviedo (0-2, 4.58 ERA), who is winless in 12 career starts. He deserved a better fate in his last outing, as he blanked Miami for seven innings on Wednesday but wound up with a no-decision.

The Cardinals lost three of four games in Atlanta last week. They split a doubleheader on Sunday, winning the opener 9-1 and getting shut out in the nightcap 1-0.

"Our offense is capable," St. Louis manager Mike Shildt said. "I think that's the frustrating part of it, when we don't put together consistent at-bats over any period or stretch."

Top power threats Nolan Arenado and Paul Goldschmidt homered in the first game. Arenado says that needs to happen more often in order for the Cards to contend in the National League Central Division.

"We start hitting the way we know how, we're going to win some games," Arenado said. "We're going to be right where we need to be."