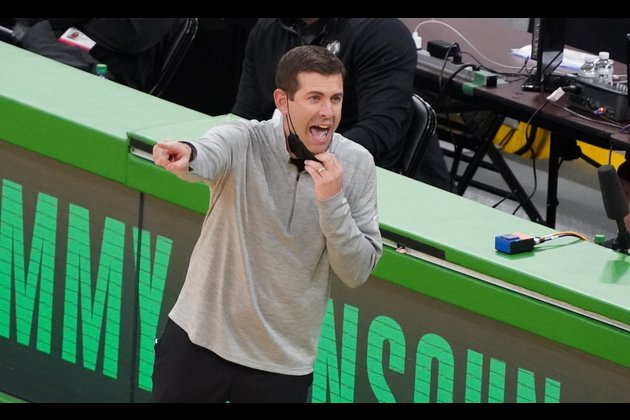 Boston Celtics coach Brad Stevens is leaving the sideline to replace Danny Ainge as the president of basketball operations.

The team said Ainge, 62, is retiring after 18 seasons and will assist during the transition this offsearson.

A search for a new head coach will begin immediately with Stevens responsible for finding his replacement.

"Danny has made all the difference over the past 18 years -- our record of winning percentage and playoff victories is near the top of the league during that time. He has always been a relentless competitor and a winner," Wyc Grousbeck, the Celtics co-owner, said Wednesday. "Turning to Brad is a natural next step, since we have built a partnership over the past eight years, and he is a special basketball mind. We want him to lead us into the next great era of Celtics basketball."

The Celtics were eliminated from the playoffs in five games by the Brooklyn Nets, who dominated Game 5 of the first-round series on Tuesday. They finished the regular season with a 36-36 record, struggling to find their momentum amid losses to key players because of injuries and extended COVID-19 absences.

Boston didn't announce any other front office moves, nor did the team address the future of Mike Zarren, Ainge's assistant who long was considered to be his successor.

During Ainge's tenure, the Celtics made 15 playoff appearances, seven Eastern Conference finals and two NBA Finals and won the championship in 2008, the franchise's 17th and first in 22 years. As a player with the Celtics, Ainge won NBA titles in 1984 and '86.

Stevens turned down a reported seven-year, $70 million offer to return to his home state and coach the Indiana Hoosiers this spring. He is a legend in Indiana, where he led Butler to back-to-back NCAA championship games in 2010 and '11.

ESPN said Stevens reportedly was "worn down" by coaching and welcomed the chance to transition to a new role.

The Celtics lost in the Eastern Conference finals three times in Stevens' eight-year tenure as coach, including in 2020.

"I'm grateful to ownership and to Danny for trusting me with this opportunity," Stevens said. "I'm excited to tackle this new role, starting with a wide ranging and comprehensive search for our next head coach. I love the Celtics, and know the great honor and responsibility that comes with this job. I will give it everything I have to help us be in position to consistently compete for championships."

Ainge endorsed Stevens for the job.

"Helping guide this organization has been the thrill of a lifetime, and having worked side-by-side with him since he's been here, I know we couldn't be in better hands than with Brad guiding the team going forward," Ainge said. "I'm grateful to ownership, all of my Celtics colleagues, and the best fans in basketball for being part of the journey."

Yahoo Sports reported Wednesday that early candidates for the head coaching job are Jason Kidd, currently a Los Angeles Lakers assistant who previously was head coach of the Nets and Milwaukee Bucks, and Lloyd Pierce, fired this season as head coach of the Atlanta Hawks.