After dominating Kings, Vegas looks for another win 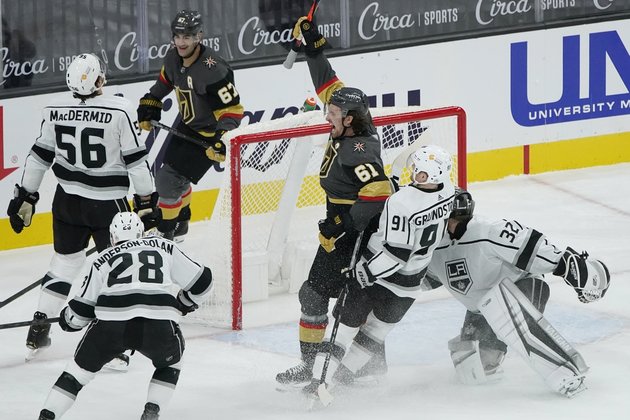 The Vegas Golden Knights will try to complete a sweep of their back-to-back series with the Los Angeles Kings when the two teams meet on Sunday afternoon in Las Vegas.

The Golden Knights didn't show any rust following a nine-day layoff due to COVID-19 in Friday night's opener, taking a 1-0 leadon a Nicolas Hague goal on their first shot of the game and scoring four times on their first 10 shots to send Jonathan Quick to an early exit while building a 5-0 lead en route to a 5-2 victory.

Hague and William Karlsson both had a goal and two assists, Mark Stone and Jonathan Marchessault each added a goal and an assist and Max Pacioretty tied a career-high with three assists.

It was the first game for the Golden Knights since a 5-4 shootout home loss to St. Louis on Jan. 26. That's the night when general manager Kelly McCrimmon and members of the nearby Henderson Silver Knights coaching staff were last-minute replacements for Peter DeBoer and his staff following a positive test result that eventually forced the team to shut things down. Three games were postponed and the team didn't return to practice until Wednesday.

DeBoer was cleared to return to the bench on Friday but defenseman Alex Pietrangelo remained in protocol.

"Veteran group, a lot of maturity," DeBoer said of his team's smooth transition from the long layoff. "When you think about what they've been through, with not just COVID protocols and the players missing, but also a lot of your coaching staff has been missing, and the preparation has been put on them.

"That's the impressive part, that they have the discipline and recognition of knowing how important it is, and they got it done tonight."

Getting off to such a quick start was key, according to Karlsson.

"Every time you score a goal, that's a momentum swing for us," he said. "To get an early one, it's great. You get a second one, that's also great, and you keep rolling. Definitely we feed off that energy. It was a good first period, a lot of energy."

Vegas nearly made it 6-0 in the second period but another goal by Stone was taken off the board for goaltender interference by Cody Glass after a coaches' challenge. Los Angeles then got goals by Austin Wagner and Dustin Brown midway through the third period to make the score respectable.

"I loved our start and loved the fact we got a lead, but I'm not sure the scoreboard reflected exactly how we were playing," DeBoer said. "It wasn't a perfect game, but we showed up and got the job done."

Kings coach Todd McLellan was upset with his team's intensity after a 3-1 loss to visiting Anaheim on Tuesday but didn't use that excuse for his team's slow start on Friday night.

"Their speed overwhelmed us, that's pretty evident," McLellan said. "I didn't mind our compete, and our battle was a lot better today than it was against Anaheim a few days ago.

"We made some poor decisions diving in on 50-50 pucks, diving in, and they skated right by us," McLellan added. "The other night, we were upset, all of us, players and coaches, about the effort we put in. (Tonight) we made mistakes, and mistakes are repairable over time."