Knights and Ducks find positives ahead of rematch 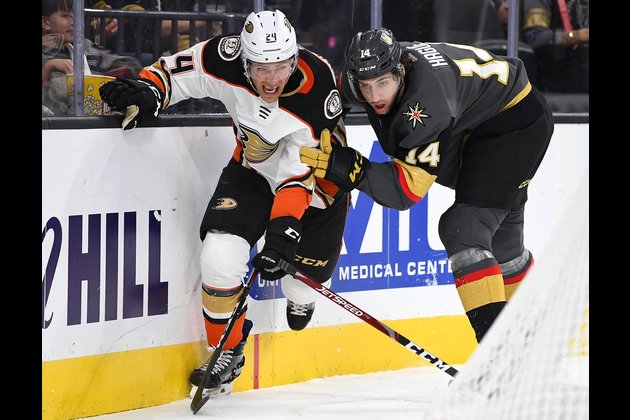 The Anaheim Ducks and Vegas Golden Knights both accentuated the positives after Vegas scored three goals in the third period to win Thursday night's season-opener in Las Vegas, 5-2.

Anaheim, which fell behind 2-0 in the first 2:13, rallied to tie it later in the first period and controlled play for most of the second period. But Vegas, behind the play of Mark Stone, dominated the third period.

After a day off on Friday, the teams conclude their back-to-back at T-Mobile Arena on Saturday night.

Stone, named the first captain in the team's four-year history on Wednesday, scored what proved to be the game-winning goal 49 seconds into the third period. Stone then set up Max Pacioretty with a key insurance goal with a nifty assist, sliding the pass cross-ice as he was falling to the ice after a hit from Rickard Rakell.

For his effort, Stone was named the No. 1 star of the game and celebrated by waving to the empty stands.

"He led the way," Vegas coach Peter DeBoer said. "That's why he's wearing a C. He has the ability to raise his level at important times. That's what you want your captain to do."

The game started like it would be an easy win for the Golden Knights with Jonathan Marchessault and Tomas Nosek scoring just 66 seconds apart in the first 2:13 to give Vegas a quick 2-0 lead.

But Anaheim tied it before the midway point of the period on a pair of goals by Max Comtois and nearly took the lead in the second period when Danton Heinen fired a shot off the crossbar.

"Our response in the first period was great, the way we just took a deep breath," said defenseman Kevin Shattenkirk. "We realized it was the first game of the year, no exhibition games, (and) there's going to be some mistakes made and they capitalized on them, but we did the same thing to them."

"We didn't hang our heads when we got down early," added Ducks coach Dallas Eakins. "We were able to battle back and get back in the game. ... I thought our second period was a real good one overall for us. So, there were some good things, but in the end, it's about the two points and there's a few things we've got to clean up."

Shattenkirk, who signed a three-year, $11.7 million contract with Anaheim after winning the Stanley Cup with the Tampa Bay Lightning last season, said it was an odd feeling playing in an empty T-Mobile Arena generally regarded as the loudest in the NHL.

"It's a different game," Shattenkirk said. "You can hear everyone on the ice. You can hear the plays being made. You have to create your own energy. It's almost easier to grab momentum shifts back in your favor because you don't feel like the crowd is on top of you. It's something we're going to have to adjust to but something we can use positively."

Each team was whistled for only one minor penalty in the contest. DeBoer believes that will change in the second games of back-to-backs this season.

"You're going to have a lot of heated battles that are going to carry over night to night," DeBoer said. "I'm excited about the format."