Lamar Jackson Is Eager to Erase His Playoff Narrative 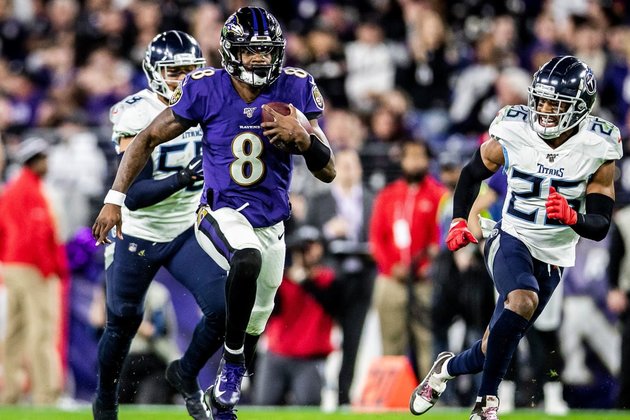 There aren't many blemishes on Lamar Jackson's resume. He's one of a handful of quarterbacks to make the playoffs in each of his first three seasons, an NFL MVP and has broken numerous league records.

But there's one that's a thorn in Jackson's side. He's 0-for-2 in the playoffs.

Until Jackson remedies that, the critics will still have some ammunition.

As Jackson prepares to enter his third postseason with Sunday's wild-card matchup against the Tennessee Titans, the team that knocked he and the top-seeded Ravens out last year, the Ravens' superstar quarterback knows the narrative.

"I don't really care about what people got to say," Jackson said. "It is what it is, but I'm definitely trying to erase that narrative right there. That's No.1 right now in my mind."

Jackson is "obsessed" with winning a Super Bowl, but that burning desire has sometimes seemed to trip him up.

In Jackson's first playoff outing against the Los Angeles Chargers in 2018, Baltimore fumbled three times in its first two drives, including two by Jackson. The Ravens fell into a quick 12-0 hole and were shut out in the first half.

Jackson rallied the Ravens in the fourth quarter, but it was too little, too late in a 23-17 loss.

Last year, Jackson went into the playoffs talking about how he and the Ravens needed to start faster. They had to have more urgency, he said.

After a 14-2 season and first-round bye, Baltimore went into the game heavily favored and looked ready at the jump. The defense forced an early punt and the offense marched back down the field, picking up 44 yards on the Ravens' first six plays.

But then a pass to tight end Mark Andrews was a bit too high and Andrews, who was nursing an injury, couldn't elevate enough to haul it in. The pass went off his fingertips and was intercepted. Jackson was so frustrated that he tackled Titans safety Kevin Byard by the facemask, tacking on a 15-yard penalty.

The Titans punched in a touchdown from there, then got a fourth-and-1 stop on the next drive, and punched in another score on a one-play, 45-yard touchdown pass to jump out to an early 14-0 lead.

Jackson was angry. He took over the game in the second half and finished with a whopping 508 total yards (365 passing and 143 running), but once again, it wasn't enough.

It's not fun to relive that playoff history, and Jackson wasn't too interested in doing so Wednesday, but it's important to note how it has shaped Jackson's mindset as he gets ready for his third attempt.

"Just focus. Focus on the task at hand," Jackson said. "When you get in there, just take your time because things don't [always] happen the way it should. Don't try to make things happen right away. Take your time. I feel like that's what I did a little bit, sometimes trying to do too much."

Jackson said he felt "sluggish" during last season's playoff game, attributing it to the team's first-round bye. Jackson also didn't play in the Week 17 regular-season finale, so while he and the offense were on a roll, Jackson had a two-week layoff between games.

"I wasn't really quick with my twitches. I wasn't quick at all," Jackson said. "No bye week for us. We're going straight into it, heads up high with our eyes focused on the task at hand."

That has been the Ravens' mantra over the five-game winning streak that vaulted Baltimore back into the playoffs. Jackson has repeated "focus" and "finish" countless times.

"I would say I matured. I think I did, but it's easy for me to say that," Jackson said with a chuckle.

It's easy to forget that Jackson is just 23 years old because he's had so many successes at such a young age. But his teammates see a growing leader who won't let his past playoff outings faze him.

"He's a different type of guy. His mindset, the way he thinks, that's not going to be something that's going to weigh him down or affect the way he plays in this game," tight end Mark Andrews said. "He's got big goals, we all do. We're all excited for this game. He's got a lot of teammates to help him out. ... This is a different team with a different mindset."

Of course, too much gets put on Jackson for the Ravens' early playoff exits the past two years. That's life as an NFL quarterback.

Head Coach John Harbaugh was asked Wednesday about the feeling that Sunday's game is especially important for Jackson.

"Playoff games are big. They're opportunities, and it takes a lot to get to the playoffs," Harbaugh said. "It takes a lot; it takes a whole year worth of work to get back to the same spot. So, that's not lost on anybody. So, [it's] no different for Lamar than anybody else in that sense."

The Ravens' success in many ways rides on Jackson. But Baltimore isn't going to put too much pressure on its quarterback, and he won't either. Asked what's different in this meeting with the Titans than the previous two times, Jackson said "our mindset."

"My mindset is different," Jackson said. "We've got another opportunity this time. This time let's just finish."