Sam Darnold: 'I Have Faith in This Organization' 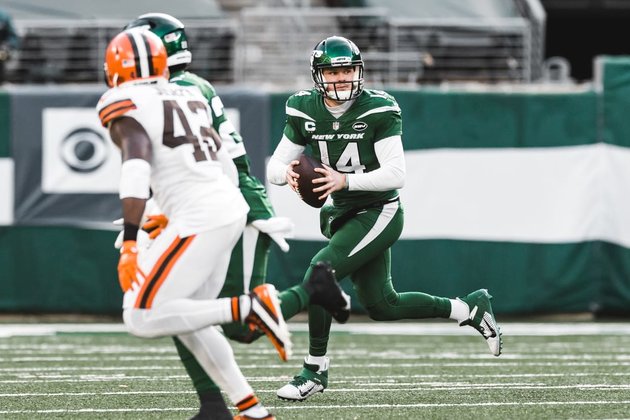 Jets QB Reflects on a Challenging Season, and Looks to the Future Jack Bell

For Christmas, Jets quarterback Sam Darnold had a couple of victories sandwiched around the holiday that did the trick for presents. But why stop there?

"I didn't really ask for much," he said. "I got a lot of different clothes and Santa left me for my house in Southern California with a couple of lounge chairs for right by the pool. That's my big gift this year. The clothes and a pair of Uggs slippers, my other ones were trashed from college. It was just great to be able to have my family come out and spend the holiday with them."

With a game to go -- Sunday at New England -- and the possibility of closing out the 2020 NFL season with a third-straight victory, Darnold said he is well aware that he has yet to notch a win against the Patriots in this, the third year of his NFL career. He is also well aware that Jets Nation is starved for a win against Tom Brady's former team.

"It really is just another game for us," he told Bart Scott and Dan Graca on the Inside the Jets podcast. "You have to have the same mentality and have good meetings and go to Foxborough and get a win. The Patriots, yeah I haven't beaten them and understand the things that go with it. At the end of day I haven't played them this year. They are a different team than last year.

"This is a faceless opponent. We have to study the same way and put in a good week of work and get another W."

In last Sunday's win over the visiting Browns, Darnold played an efficient if unspectacular game. No mistakes for the third straight game and a role in another upset victory.

As a quarterback, he watched as one of his wide receivers -- Jamison Crowder -- threw a TD pass for the Jets' first score. As a scrambler, Darnold turned running back when in the second quarter he lowered his (previously injured) right shoulder and powered his way over Cleveland LB Malcolm Smith.

"We knew it was going to get called," Darnold said of the pass play that went from him to Ty Johnson to Crowder for a 43-yard TD pass to Braxton Berrios. "Crowder was calling his number all week. He'd say 'Man coach you gotta call that one. You gotta call that one coach.' He's funny that way. Even in the huddle when we called the play he was tapping Berrios saying, 'I got you on this.' Berrios was 'hey keep it low key.' It was awesome to see them connect. That was special. In practice he [Crowder] missed the pass a little to the left. I thought we would scratch it. He said 'I'll get it right in the game.' And he did.

"After I said something to him like 'Now you might want to take over next series.' Crowder, he doesn't say much as it is.' I was super stoked when he threw that TD. I knew it would work. He put it over the shoulder. It was awesome to watch and awesome to be able to celebrate after."

On the scramble that went for a first down, Darnold came face to face with Smith, a former Super Bowl MVP with Seattle. Did the QB ever consider sliding or did he want to try and run over Smith?

"I didn't mean to, it might have looked cool and sparked some energy on the bench and throughout the team, but I wasn't trying to do what I did," Darnold said. "I was running at him and took it left to break contact. It broke it off and I was expecting him to run to his right and try to stop me. He stayed right there and I had too much momentum. I couldn't slide.

"I ran into him and got up. Crowder was loving it. The offensive line was stoked. I told Malcolm that the next time I'm sliding. I told him next time I'm getting down. I didn't mean to do that. It definitely was a weird situation. I'm happy I got the first down and I'm happy I came out of it healthy."

The track of the 2020 season could have fractured the locker room and turned teammate against teammate. But that simply hasn't been the case for the Jets, which is a testament to the quality of the players and the coaching staff.

"Honestly, we've come to work every single week," Darnold said. "The guys have been uplifting every week, even losing as many as we have. At the same time winning cures everything. When you win, the guys have more energy throughout the week. When we were 0-13 guys were still coming in the building ready to work. It's a credit to the type of guys we have in the locker room. Really good dudes and guys I love playing with."

He added: "Just the way those guys have stepped up. We kind of forgot [about the losing] and tuned out the outside noise. In New York, you get it, everyone can see it on social. But to come to work every single day is inspiring man. Guys like [Frank] Gore to have him around every day, getting to 16,000 yards [only the third RB in NFL history to do it] is incredible for him. He's been someone we've all looked at with this roster, how young we are. He's the same guy, day in, day out. He's been that rock for us. He doesn't say much and speaks a lot with actions on a day-to-day basis. He's one of the guys who has been awesome for us. For him to get to 16,000 was incredible."

For Darnold, as it is for nearly every player in the NFL, the future is full of uncertainty. The draft, contract status, personnel -- it all goes in the blender.

"I have faith in this organization and what we're doing and in the future," he said. "I always will no matter the circumstance. I always believe things are going to get better. The last couple of weeks we played good football, complementary and we won and beat two really good teams. We're capable, we just have to be more consistent. And I really do put that on myself. I didn't play well enough to win football games early. I've learned from that. Protect the ball and give our team a chance to win games. I really do have faith in this organization and what we can do in the future."