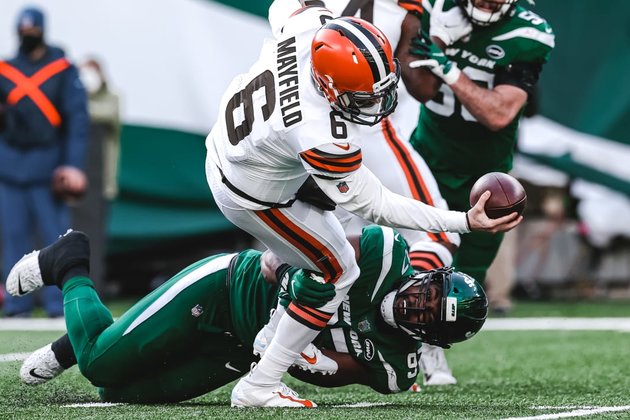 Defense Dominant in First Half, Comes Up Big Late

The Jets defense sealed the game in the Jets' 23-16 win over the Browns for New York's second straight win.

"Everyone knows the type of adversity that we've faced this year, so to pull out a second win, it feel great," DT Folorunso Fatukasi said. "You put it in all that work, all that effort and the men in the locker room have faced so much adversity and kept coming to work. Kept grinding and just not making excuses and finding ways to get better. To come out with a second win regardless of the adversities we've been through, it feels good. ... I'm extremely proud of these guys. We have one more and obviously we have to go in and make our corrections and look at the things we have to get better. It's hard to win in this league and you want to take them and cherish them."

The defense was dominant in the first half for the second straight week as the Browns totaled 103 yards and scored 3 points. Without DL Quinnen Williams and LB Harvey Langi, both out for the season with injuries, the Green & White held the NFL's No. 3 rushing offense to 4 yards on 9 carries (0.4 avg) in the first half. Nick Chubb, the NFL's No. 5 leading rusher, led Cleveland with 8 carries for 6 yards. Three of the defense's four sacks came in the first half, too.

"When you look at it, holding that team to 45 yards rushing, it was a great defensive effort from the whole unit," Head Coach Adam Gase said. "It takes the safeties, the cornerbacks, linebackers, front, but obviously it starts up front. I thought that guys played with great energy. They played physical. We did a good job of gang tackling. There was only one or two times where one of their backs kind of popped out."

After holding Cleveland to a punt on its opening drive in the second half, the Jets defense let up back-to-back scoring drives, making it a one-possession game, 20-16. But the Jets defense forced turnovers on back-to-back drives as LB Tarell Basham had a strip-sack that was recovered by DL John Franklin-Myers on the Browns' 17-yard line. K Sam Ficken extended the Jets' lead, 23-16, with a 34-yard field goal.

On the next possession, the Browns were faced with fourth-and-1 on the Jets' 16-yard line when Basham forced a fumble on QB Baker Mayfield. Mayfield fumbled and it was advanced by RB Kareem Hunt, but according to NFL rules, no player other than Mayfield could have advanced it. The ball was ruled at the spot of the fumble and turned over to the Jets on downs.

"I just thought it was a great job of that second effort," Gase said. "When I saw [Mayfield] standing straight up, I'm not sure who it was that came off the edge there, but when I saw the ball pop free, it was about where was he when it happened. I wasn't really sure there and then once they replayed it, I felt a lot better about it."

WR Jamison Crowder became the first NFL player since 2001 (David Patten, New England) and only second NFL player in last 61 seasons with at least 90 receiving yds, 40 pass yards and 10 rushing yards in a game, according to Radar 360. He finished with 92 yards and 1 TD on 7 receptions to go along with 14 rushing yards and a 43-yard TD pass.

"He's so consistent," Gase said. "You always can count on him. The quarterback can definitely count on him to be in the right spot at the right time and make the play that needs to be made in the right moment, especially when it's a critical one. When we need a big play, whether it's the perfect coverage or perfect route, it seems like he comes down with the ball. He makes something happen when we need something to."

He gave the team its first lead of the game, 7-3, with his touchdown throw to fellow slot receiver Braxton Berrios down the sideline for a 43-yard touchdown. It was the longest touchdown play by a non-quarterback since WR Brad Smith hit TE Dustin Keller with a 3-yard pass in 2010. It was the longest completion by a Jets non-QB since at least 1990. It was Crowder's second career pass attempt.

"It was a play we worked on all week during practice," Crowder said of his TD pass. "In practice, I didn't throw it as well, but we still connected on it. We came out here today and it was better. I dropped it right where it needed to be and Berrios made a play. I'm just glad we got the win."

The Jets offense put together a balanced attack. QB Sam Darnold threw for 175 yards and 2 TDs and the team ran for 131 yards. Frank Gore, who left the game with a chest injury, became the third player in NFL history to eclipse 16,000 rushing yards.

The Green & White climbed out to a 20-3 lead and put together a scoring drive to open the second half for the second straight week. Crowder capped an 8-play, 75-yard drive with a 30-yard TD catch that extended the team's lead, 20-3. However, the offense's streak of eight straight games scoring on its opening possession was snapped.

"I think, for us, we're just playing more consistent," Darnold said. "We have been having good first drives, which is well documented, but I think making the adjustments that we need to after that first drive has been much better. For us as players, we're playing more consistent throughout the game and I think it's obviously too late, but it's coming together nicely."

The Jets struggled to move the ball after their opening drive. The offense averaged 21.8 yards per drive on its next four possessions and failed to score. Darnold completed 16 of 32 (50%) and had an 87.4 QB rating.

"There were some things where I think [Darnold] was trying to push the ball down the field," Gase said. "It's a tough defense to go against, especially that front. That front is really good. We couldn't really get anything explosive for the most part. It just felt like we really had to put a drive together to get down the field and some of the third-down conversions weren't easy. He did enough for us to win and did a good job of protecting the football."

Darnold added: "Looking at the tape, I think there will be some decisions I'm going to want back or maybe throw to my first read and not getting off of it. There's some stuff like that, but overall, I'm happy about not turning the ball over and scoring when we had to."