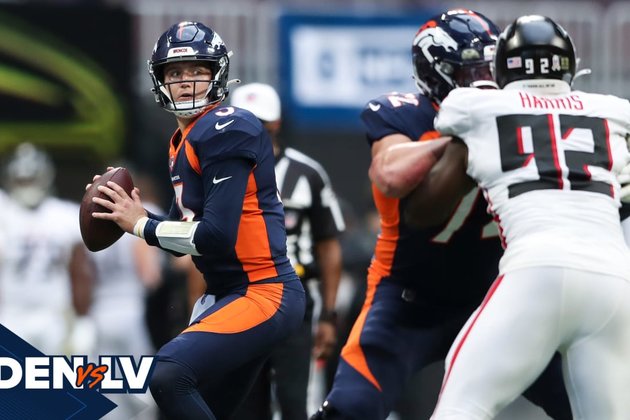 ENGLEWOOD, Colo. - It doesn't much matter that the Raiders have traded Oakland for Las Vegas or the storied Oakland Coliseum for the glimmering Allegiant Stadium.

In Head Coach Vic Fangio's mind, this is as much a rivalry as ever.

"Many of the people that I've met out in the community in my short stay here always variably sometimes get to talking about the rivalry versus the Raiders," Fangio said. "If you have a rivalry, it doesn't matter where you're playing. You could be playing on the sandlot field -it's still a rivalry."

That rivalry has been reflected in recent results, as the teams have split their last 10 matchups since the start of the 2015 season. Yet for as even as the rivalry has been - the Raiders have just a plus-9 point differential in the last 10 meetings - the road has not been kind to the Broncos. Denver has won just two AFC West road games since the end of the 2015 season, and they haven't beaten the Raiders away from Denver since Chris Harris Jr. returned an interception for a touchdown in 2015.

The Broncos will look to shift their fortunes on Sunday as they travel for the first time to Las Vegas looking to improve to 4-5 on the season.

After a tough loss in Atlanta, this game is one the Broncos desperately need to win to remain in a crowded wild-card race.

These are the questions that will decide if Denver can bounce back and earn a win inSin City:

CAN THE BRONCOS START FAST?

Of all the questions we try to answer today, this will undoubtedly be the most important. Over the last two weeks, the Broncos have scored just six total first-half points, and they've posted just two first-half touchdowns all season with Drew Lock under center. And while Denverraced back furiously against both the Chargers and Falcons - scoring 21 fourth-quarter points against each opponent - the Broncos know they won't be able to find consistent success by falling into double-digit deficits.

Then, when the Broncos have opportunities, they must take advantage. Whether due to errors in protection, a poor throw, a missed running lane, a dropped pass or the lack of a penalty flag, Denver was unable to convert chances into points.

"It was the same old song and dance," Lock said Wednesday. "There was a couple plays that could have kept us on the field. We found ourselves in long third downs. They were dropping eight [defenders] on those long third downs and forcing us to check it down and getting us off the field. They came at us early and we didn't make those little plays that they were making."

After allowing more than 200 rushing yards to the Chargers in a Week 8 win, the Broncos largely buckled down in Week 9 as they gave up just 2.9 yards per carry and 92 total rushing yards. The challenge will be greater this week, as Denver will face the league's third-leading rusher in Josh Jacobs. The former first-round pick has 588 rushing yards and six touchdowns through eight games, and he's carried the ball more than 20 times in four of the Raiders' contests. In a Week 8 win over the Browns, Jacobs carried the ball 31 times for 129 yards.

Las Vegas' ninth-ranked rushing attack doesn't end there, as former Broncos fourth-round pick Devontae Booker has carried the ball 33 times for 223 yards and a score as a change-of-pace back.

Denver's rushing defense will be without Shelby Harris, who remains on the team's COVID-19 list. The Broncos could again turn to a starting defensive line of DeMarcus Walker, DeShawn Williams and Dre'Mont Jones, which is the lineup Denver used against the Falcons. Denver will also rely heavily on Alexander Johnson and Josey Jewell, and perhaps Kareem Jackson and Justin Simmons will again be able to make plays near the line of scrimmage, as they did against the Falcons.

However the Broncos accomplish the task, it's paramount that they don't allow the Raiders to gain steam in the running game. Last year in Oakland, the Raiders chewed up time of possession as they pieced together touchdown drives of 10 plays and 13 plays in the first half to take a 14-0 halftime lead against the Broncos. Jacobs consistently earned gains of five or six yards on those drives, which allowed the Raiders to remain in third-and-short situations. Denver must find a way to stop Jacobs on early downs to force the Raiders into second-and-long and third-and-long opportunities. That on its own won't win the game for Denver, as Las Vegas has dangerous threats in wide receivers Nelson Agholor and Hunter Renfrow and tight end Darren Waller. It would, however, give the Broncos' defense a fighting chance.

After the Raiders selected Henry Ruggs III over Jerry Jeudy with the 12th-overall pick in April's NFL Draft, the two Alabama receivers will be linked for the duration of their NFL careers. As their careers begin, Jeudy has been more productive than the blazing-fast Ruggs. Jeudy has posted 30 catches for 484 yards and two touchdowns and recorded his first 100-yard game on Sunday against the Falcons. He leads the Broncos in receiving by more than 100 yards and seems to be finding his stride. Ruggs, meanwhile, has caught just 10 passes for 220 yards and a score. Most of that production came in Week 5, as he caught two passes for 118 yards and a touchdown.

"Well, it was a tough call," Raiders head coach Jon Gruden said of the decision to draft Ruggs. "We wanted to add speed to our offense. It was something we felt we were missing and we required here. We liked Jeudy a lot. We liked them all - CeeDee Lamb and there were several guys. We took three of them in the draft, so it was obviously a great year. Ruggs gave us a dimension that this franchise hasn't had in a long time. Although he hasn't caught a whole lot of passes, he sure has opened up a lot of streets and avenues for other guys. Loved watching Jeudy. I saw him really emerge again last week, but we're happy with the guy we got. I'm sure Denver's happy with the guy they got."

The spotlight will be on both of the former Crimson Tide receivers this Sunday, and perhaps the game will turn on a play made by either Jeudy or Ruggs. Jeudy certainly appears to be a focal point in Denver's offense, as he has been targeted 24 total times over the last two weeks. His route-running prowess has made him a consistent option for the Broncos, as he's been able to get separation to make big-time plays. Perhaps in Week 10, the Broncos' receiver will be able to both get the best of his former teammate and help earn a win.