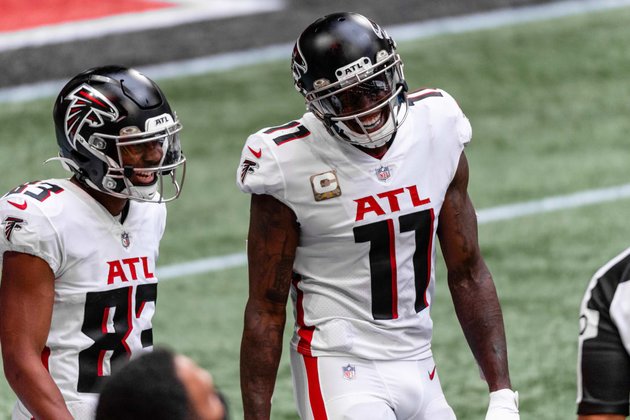 The top Falcons headlines from around the country  Will McFadden

The "next man up" mantra fits the Falcons' wide receiver room perfectly. Without Calvin Ridley in the lineup, Olamide Zaccheaus had the opportunity to show just how dynamic of a playmaker he could be and turned in a career-best performance, catching four passes for 103 yards and a 51-yard touchdown.

Zaccheaus is just the latest Falcons receiver to take over a game this season, which is a testament to the leadership at the position. That begins with Julio Jones. The All-Pro receiver is well on his way to the Hall of Fame, but for as good as he is on the field, he's held in similar regard as a leader and teammate.

"He's an unbelievable mentor, there's no question about it," Matt Ryan said of Jones. "Ju is about as generous with his time of teaching people as any player that I've been around. He does a great job. He's got incredible experience and a wealth of knowledge. He understands our offense inside and out. He has certainly expedited the development of all those guys."

Jones, himself, chipped in with five catches for 54 yards and a touchdown, but his ability to help his teammates improve and prepare was the key takeaway. In a piece for ESPN, Jeff Legwold wrote more about Jones's influence for Atlanta.

With three wins in the four games under Raheem Morris, the Falcons have looked like a different team of late. The main question now is - does Atlanta have enough time to climb out of its early season hole? NFL media researcher Brandon Mendoza believes in the Falcons' ability to do just that, predicting that Atlanta may be on the verge of an improbable run.

"You heard it here first! Yes, the Falcons face a remaining schedule that includes the Saints and Buccaneers twice, along with games against the Raiders, Chargers and reigning Super Bowl-champion Chiefs. My confidence in Atlanta is based on the premise that the Falcons have finally discovered how to hold on to a lead.

"Consider that this team, which has led in all but one game this season, has won two straight games that it's led by 15-plus points, including Sunday against the Broncos, reversing a trend established earlier in the year by the two such games Atlanta lost."

What we learned from Sunday's games

While the Falcons scored 34 points in their win against the Denver Broncos, it was the defense that emerged as a big talking point. For much of the game, Atlanta's defense locked down Denver's offense and the unit came away with a big turnover late in the action that helped clinch the win for the Falcons.

For the second-straight week, the defense provided reasons for optimism moving forward. It's a unit that has shown improvement since Raheem Morris took over as interim head coach, and something that stood out to NFL.com's Nick Shook on Sunday.

"Atlanta's defense has taken a positive turn since the firing of Quinn, which should largely be credited to the return of key players," Shook writes. "﻿Keanu Neal﻿'s presence has helped add attitude, and the combined performances of Deion Jones and promising linebacker Foye Oluokun have made the Falcons into a legitimate group on the defensive side of the ball. That reality is what propelled the Falcons, at least early, when Atlanta harassed Drew Lock﻿, forced multiple stops and turned them into a 27-6 lead. Denver's offense woke up in the fourth quarter, diminishing some of what had been a very positive day for the Falcons defense, but it stiffened in the key moments, forcing a turnover on downs while clinging to a one-score lead. Sunday's game was the latest in a month filled with mostly impressive defensive performances, and makes one wonder where the Falcons might be standing had they turned their early season close losses into victories. Above all, though, the unit is a great reason for optimism going forward."

Since assuming the role of interim head coach, Morris has led the Falcons to a 3-1 record with the lone loss coming on a literal last-second touchdown against the Detroit Lions. Falcons owner Arthur Blank said if Morris went 11-0 he'd get a very serious look, and while a perfect record is now out of the question, he may still be working his way into the running. In the opinion of ESPN's Dan Graziano, it's not an overreaction to think Morris might be Atlanta's head coach next season.

"Moving Morris to the offensive side of the ball for three years from 2016 to 2018 was a developmental move designed to broaden him and help prepare him if he should ever get the chance at another head-coach job," Graziano writes. "The Falcons believe they've developed Morris as a coaching prospect.

"It's not going to be easy -- Atlanta has a bye next week, and then six of its remaining seven games are against teams that currently have winning records, including one against the Chiefs and two each against the Saints and Buccaneers. But if their second half goes well, Morris should and will absolutely be a serious candidate to keep the job full-time."

It wasn't just the defense that looked sharp on Sunday. Matt Ryan had perhaps his best game of the season, throwing for 284 yards and three touchdowns with just one interception against the Broncos. He accomplished that without Calvin Ridley, who missed the game due to a foot injury. ESPN's Tim McManus discussed Ryan's play in greater detail after the action.

"Ryan has lifted his play, completing at least 70% of his passes in each of the past four games while throwing eight touchdowns to two interceptions," McManus writes. "His hot streak continued Sunday despite the absence of Calvin Ridley, who was sidelined with a foot injury. Second-year player Olamide Zaccheaus stepped into the starting role and posted four catches for 103 yards, including a 51-yard touchdown reception late in the first quarter that put Atlanta ahead 10-0 and in the driver's seat."