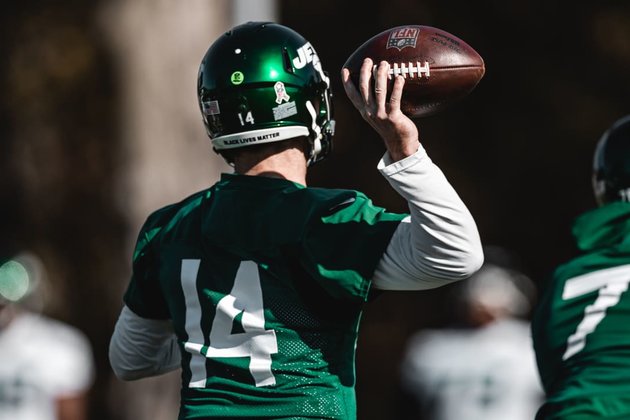 The most remarked upon shoulder in Florham Park, NJ -- and all Green & White points beyond -- was observed and evaluated on Friday when Sam Darnold returned to Jets practice and announced he and his right shoulder "felt alright" as the team prepared to face the New England Patriots (2-5) on Monday night at MetLife Stadium.

The starting QB of the Jets (0-8) practiced on Friday for the first time this week, but was cautious in his comments about the Patriots game.

Asked how he felt after practice, Darnold said: "I felt alright. I'm taking it day-by-day."

Would he be ready to play on Monday? "We'll see. Again, right now I'm taking it day-by-day. That's the best thing for me to do."

The shoulder, the AC joint, was initially injured against Denver in a Thursday night game on Oct. 1. Darnold has thrown 3 TD passes and 6 INTs in six games this season. He tweaked the shoulder on a third-down scramble last Sunday at Kansas City. An MRI earlier this week did not reveal any additional damage.

"All the throws look fine, plenty of zip on the ball, no issue losing velocity," Head Coach Adam Gase said on Friday. "It's just about how he feels when throwing.

"I think he's [Sam] done a good job focusing on staying in the moment, doing more study, more communication with his teammates, leading by example, being vocal when he has to be. There are a lot of little things people don't see. It's important to keep fighting, practicing and doing the right thing. I know it's not easy when our record is what it is now."

Gase added: "It's more about winning, getting a win, no matter who we're playing. What can he do to try and win a game."

Darnold talked about his shoulder and the second half of the season, which begins on Sunday, followed by a week off before a trip to Los Angeles to face the Chargers on Nov. 22.

"Obviously everyone wants to win," quarterback Sam Darnold said. "That's why we're in this business. That's why we're professional football players. We got here by winning football games. For us, we've just got to put our heads down and go back to work. I feel like if we do that, we can win this game and worry about the next when it's up."