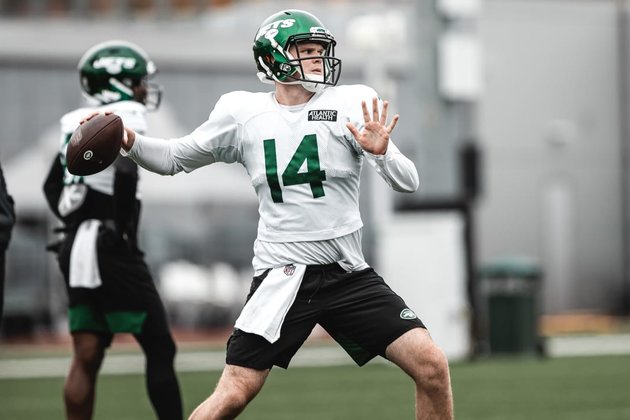 Sam Darnold Preparing for the Champs

There's little doubt that QB Sam Darnold is a California man. He grew up in Orange County south of Los Angeles and spun spirals at the University of Southern California. And as he prepares for Sunday's Jets game at Kansas City, Darnold celebrated when his beloved Brooklyn, er, Los Angeles Dodgers captured the World Series title this week.

"Their offense gets a lot of hype but we know we're going against a really, really good defense," Darnold said of Kansas City's 10th-ranked unit. "Obviously, they have the Honey Badger [Tyrann Mathieu] back there doing what he does. I played him in my rookie year, he's a good player and he is really good at disguising certain looks and disguising certain pressures and different coverages.

"Then obviously you got, we call them game-wreckers, you got Chris Jones, you got Frank Clark on the D-Line, obviously they got other guys as well, but those guys can do some special things on the football field. Then obviously, their secondary, and then their backers as well, their backers play really well and obviously the offense gets a lot of hype, but we know that we're going against a really, really good defense as well."

The Jets (0-7) will need to play a near-perfect game against the Chiefs, and for the second week in a row offensive coordinator Dowell Loggains, instead of Head Coach Adam Gase, will call the plays. In last week's game against Buffalo, Loggains integrated motion before the snap that helped the Jets and Darnold play perhaps their best quarter of the 2020 NFL season.

"I think having some of that stuff in helps with diagnosing defenses and obviously helps in the run game, in the pass game as well just with certain things," Darnold said. "So yeah, definitely, shifts, motions, you know when any team does it, when you watch other teams do it on film, you see how it helps them, so we said kind of why not and I felt like it was really good for us."

Darnold will likely be without one of his favorite targets this weekend in slot WR Jamison Crowder, who is doubtful for Sunday's game with a groin injury. Crowder missed last week's game against the Bills and Gase said that the team hasn't discussed placing him on injured reserve. WR Breshad Perriman (concussion) is out, too.

"Those are the things you can't really control," Gase said. "I know it's a great opportunity for [Denzel] Mims in his second game. We'll get Jeff Smith, [Braxton] Berrios, Vyncint [Smith]. Maybe we'll be able to elevate one of the practice squad guys. It's probably harder for [Sam] than anybody because it's a different group out there. I look at it as it's a great opportunity for a lot of dudes."

Jets rookie S Ashtyn Davis is in line for his first NFL start on Sunday, against the Chiefs, with McDougald out because of a shoulder injury. Davis, who was drafted in the third round and had an impressive training camp, has taken 59 snaps on defense (12.2%) this season and 60 on special teams (31.6%).

"I definitely think he's ready," Gase said. "He's one of those guys who extremely was all over it early in training camp as far as assignment-wise and felt good about that. He seems to be one of those guys that the ball finds him for some reason, whatever it is. ... When you've got a guy like that, you want to see that and see how that goes in a game because some of these guys are magnets for the ball.