D-backs search for answers as Astros find some 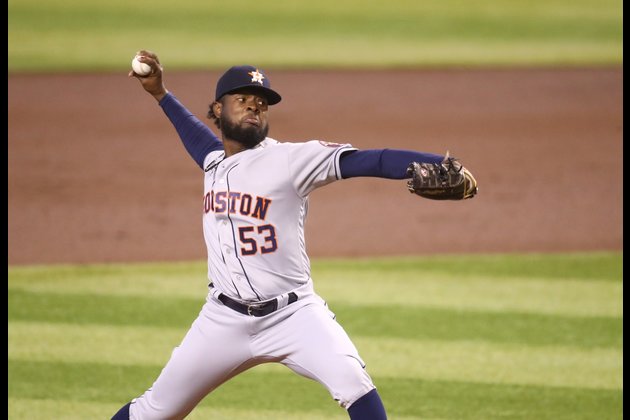 Less than two weeks into the season, it has become clear that teams in need of a win to rebuild some momentum have found the Arizona Diamondbacks and Chase Field a welcome place to do so.

Last week, the Los Angeles Dodgers came to Phoenix and took three of four games against Arizona, improving from 4-2 to 7-3. Then Tuesday, the Houston Astros, with injuries to their rotation and a young and inexperienced bullpen, got big hits from struggling batters and started their series in Arizona with an 8-2 win.

After going extra innings in three of four games, the Astros got a day off Monday, then took the field in Phoenix and struck early against Diamondbacks ace Madison Bumgarner.

While four Houston rookie pitchers were holding down the Diamondbacks, the Astros hammered Bumgarner for eight runs (seven earned) in 4 1/3 innings.

The pitching issues continue, with Houston closer Roberto Osuna possibly headed for season-ending Tommy John surgery. But the Astros may have found a keeper in their rotation in 23-year-old Cristian Javier, who allowed a run on four hits in six innings against Arizona in winning his second career big league start.

"I think Javier is going to be in our rotation for a long time. The kid has it all," shortstop Carlos Correa said, according to the Houston Chronicle.

The Astros hope to keep things rolling in the desert with right-hander Lance McCullers Jr. getting the start Wednesday night. McCullers (1-0, 5.40 ERA) has walked seven batters in 10 innings.

McCullers has started two games in his career against the Diamondbacks, going 1-0 with a 4.50 ERA.

The Diamondbacks have mustered only a combined four runs in losing three straight games, and they aren't getting much help from the top end of their rotation. Bumgarner is winless in three starts, and Wednesday's starter, Robbie Ray, is 0-2 with an 8.64 ERA.

Ray is 1-1 with a 4.32 ERA in his career against the Astros. He has 30 strikeouts in five starts against Houston.

"We're doing everything we can do to turn this thing around," Bumgarner said.

Arizona has lost five of its past six games, and things reached the point on Tuesday where manager Torey Lovullo pulled five position players from the field and replaced them after five innings.

Lovullo was asked it that was designed to send a message to his slumping team.

"No, I don't send messages like that. I'll send messages directly face to face with guys," he said. "I just wanted to get some of our guys who have been going every day a little bit more rest and get them off their feet. Definitely wasn't intended to send any type of message. I just wanted to maybe live to fight another day, let them watch a little baseball and let the understudies get some at-bats."

Lovullo said he was encouraged by some things he saw in Tuesday's game, and he hopes the Diamondbacks can turn a corner quickly.

"Dig hard, dig together, accept coaching," Lovullo said. "These guys are going to grind through these rugged times."