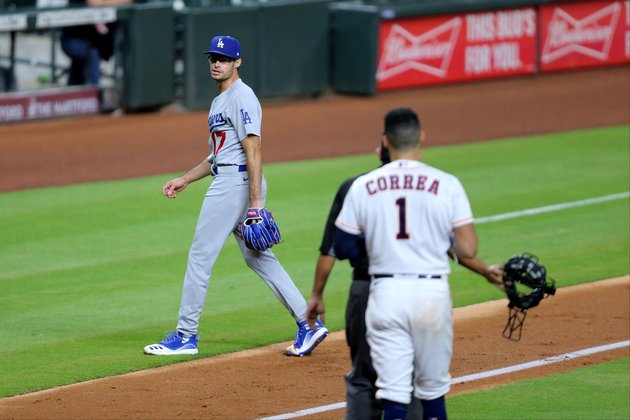 One of the more anticipated games of the shortened MLB season lived up to the hype -- and perhaps then some -- as benches emptied during the sixth inning of Tuesday night's contest between the Los Angeles Dodgers and the host Houston Astros.

The game marked the first time the teams faced off since the Astros' cheating scandal erupted in the offseason, when an MLB investigation uncovered a sign-stealing system Houston implemented for the 2017 season -- a year that ended with the Astros beating the Dodgers in a seven-game World Series.

After the Dodgers took control Tuesday of an eventual 5-2 win with a five-run fifth inning, Los Angeles manager Dave Roberts handed the ball to reliever Joe Kelly in the bottom of the sixth. With one out, the hard-throwing right-hander sent a 96 mph fastball over the head of Alex Bregman on a 3-0 count. Three pitches later, Michael Brantley stepped on Kelly's foot on the first base bag while legging out a potential double-play grounder.

After a brief exchange of words, Kelly nearly hit Houston's Yuli Gurriel with a pitch during a four-pitch walk, then sent a knuckle curve over the head of Alex Correa before eventually striking him out to end the inning. As Kelly headed toward the dugout, the sides began barking at each other, with Kelly seen yelling and making faces toward Correa.

Soon after, both dugouts emptied with players and coaches converging at home plate. Both mangers -- Roberts and the Astros' Dusty Baker -- spoke with umpires as the teams returned to their respective dugouts, but no players or coaches were ejected. No punches were thrown, either, but there were some verbal jabs between the sides after the game.

"I threw him a curveball. I guess they didn't take too kind to a curveball," Kelly said on a video call with reporters of his pitch to Correa. "It is what it is. I walked a couple guys, was able to get out of the inning. I finally made one good pitch for the punchout and was able to keep the lead where it was at."

Kelly added of what sparked the benches to empty, "I don't remember the words. It was kind of in the moment, I think. I guess my expression was what I interpreted in my head with what he was saying."

But Baker said it was the 3-0 pitch to Bregman that initially set the Astros off, with the Correa exchange proving to be too much.

"Well, I mean, balls get away sometimes, but not that many in the big leagues," Baker said. "A 3-0 fastball over a guy's head, now you're flirting with ending his career. And a couple other guys, balls were close.

"And then what really enraged everybody is when he told Carlos -- I mean he struck him out -- and told him, 'Nice swing, (expletive).' What are you supposed to do then? And then what upset me is the umpires warned us. Why don't you warn him? He's the one throwing the ball. He's the one starting this mess in the first place. I didn't like it at all."

Kelly said of the pitch to Bregman, "It was a ball, obviously. It wasn't my best pitch. It was ball four and I walked him. It's never good to put a guy on when you're leading the game, so it's something (where) I wasn't feeling the greatest, wasn't the most comfortable."

But Baker wasn't buying that Kelly simply had control issues.

"(MLB) said they warned everybody from the beginning (about throwing at Astros players), but this is the first time it's happened," Baker said. "And this isn't the first time I've seen Joe Kelly in a skirmish like this. They need to talk their own guys. I'm not going to talk to my guys. My guys didn't do nothing, OK?"

The Dodgers and Astros play the second game of their two-game set Wednesday night.

Washington DC [US], January 27 (ANI): US President Joe Biden and Russian President Vladimir Putin discussed the extension of the ...

The acting U.S. ambassador to the United Nations has reaffirmed the Biden administration's commitment to a two-state solution for Israel ...