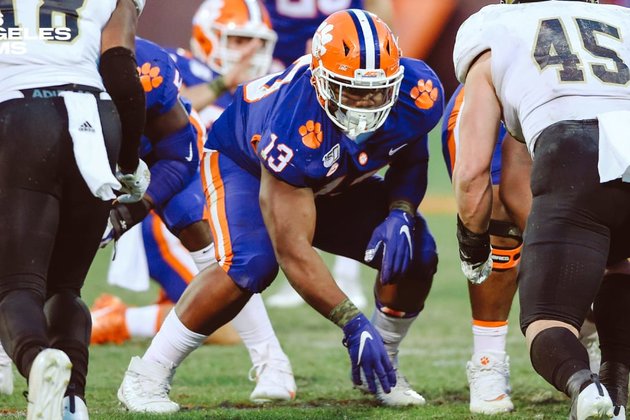 The Rams used their ninth and final draft pick on offensive guard Tremayne Anchrum, selecting him 250th overall in seventh round. Here are five things you should know about the former Clemson standout.

As Rams Director of College Scouting Brad Holmes was gathering information on Anchrum, one quote from one of his sources stood out among the rest about his background.

"One of the guys says that he was like 18 going on 28 when he first arrived there (at Clemson) as a freshman," Holmes said on a Rams post-draft show. "I just thought that spoke volumes about his maturity and his intangibles."

Anchrum's father played basketball for George Raveling at the University of Southern California and led the Trojans in rebounding as a sophomore and three-point shooting percentage as a junior.

"I guess the closest to Los Angeles I've been is standing next to his jersey that's mounted downstairs in the basement," Anchrum said on a video conference call with local media last month. "I have not been there many times, but I have been to California before."

Clemson reached the College Football Playoff National Championship in each of Anchrum's final two seasons, defeating Alabama 44-16 in 2019 then falling to LSU 42-25 this year. Still, the Tigers went 55-4 overall in Anchrum's four seasons, including a perfect 15-0 season punctuated by that 44-16 victory over the Crimson Tide.

After being a spot starter for Clemson his first two years, he became the team's full-time starting right tackle for his last two years. However, he also spent time during Clemson's postseason practices playing guard, which is where Holmes projects him to play on the Rams offensive line.

5) College coach spoke highly of him

"He's incredibly smart, very athletic, strong, and has a great football I.Q.," Swinney said in a statement posted to the program's Twitter account. "He is another guy that's going to change a locker room from a leadership standpoint."

Nearly two thirds of U.S. restaurant closures will be permanent

Interest rates in U.S. to remain low for next three years, says Fed

Interest rates are expected to stay at or near zero through 2023, the Federal Reserve said Wednesday.Announced as the U.S. ...

Number of children living in poverty rises to 1.2 billion

The Covid-19 pandemic has caused a major rise in child poverty across the world. In a new UNICEF and Save ...

Iranian government lashes out at Pompeo over human rights remarks