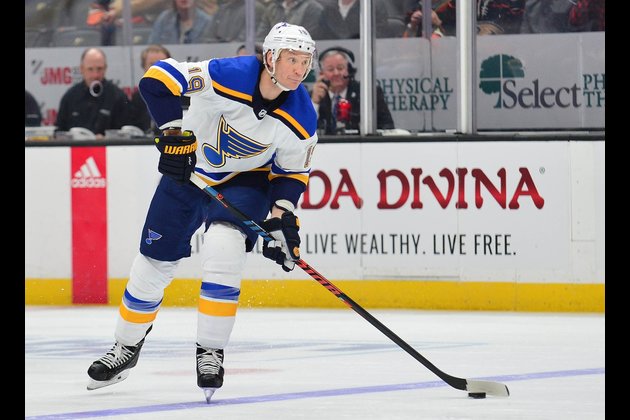 The Central Division-leading St. Louis Blues complete what was supposed to be a fun Dad's Trip to Southern California and Las Vegas when they face the Vegas Golden Knights on Thursday night.

The first game of the trip on Tuesday night in Anaheim was postponed with 7:50 remaining in the first period after veteran defenseman Jay Bouwmeester collapsed on the bench during a television timeout and sustained what the team reported was a "cardiac episode."

After several Blues players frantically waived for medical personnel to come to the bench, the 36-year-old Bouwmeester left the arena on a stretcher along with his father Dan for further tests at UC Irvine Medical Center. He was reported to be alert and moving all extremities despite being unresponsive on the bench before being revived with a defibrillator.

The Blues, scheduled to fly a charter to Las Vegas immediately after the game (which was tied 1-1 at the time of the incident), instead remained in Orange County overnight before flying to Nevada on Wednesday afternoon.

"The Blues will play in Las Vegas tomorrow night," St. Louis GM Doug Armstrong, who watched the incident on TV at home, said during a press conference at the team's Las Vegas hotel.

"It's hard to even explain," Blues captain Alex Pietrangelo said when asked how stunning the incident was. "It happened so fast. It felt like it was an eternity for us. We just reacted as fast as we could. Everybody seemed like they wanted to help and do something. ...

"It's not easy to see anybody go through it, let all alone your close friend and teammate that you spend every day with."

Pietrangelo said he visited Bouwmeester at the hospital late Tuesday night and set up a FaceTime with other players who also got to speak with Bouwmeester.

"He was in good spirits last night with us," Pietrangelo said. "Typical Jay, so it certainly made us all feel a lot better today knowing that we had the opportunity to talk to him."

Meanwhile, Vegas canceled its practice scheduled in nearby Summerlin, Nev., after returning from a lethargic 4-0 loss at Minnesota on Tuesday night.

"Obviously not what we wanted," said Peter DeBoer, who fell to 4-3-2 since replacing Gerard Gallant as head coach on Jan. 15. "Three of their four goals are in the crease. They were just hungrier than we were around our net."

It was the third loss in four games (1-2-1) for the Golden Knights, who are a disappointing 14-10-4 at T-Mobile Arena this season. That includes a 6-5 shootout loss to Carolina on Saturday, when they blew a two-goal lead in the third period while also surrendering four third-period goals to the Hurricanes.

"You have to dig deep when you get into these situations," Vegas forward Mark Stone said. "We maybe had a handful of guys competing and ready to play in tonight's game."

How do you fix that?

"I don't know, you can't wash it away," Stone said. "You need to forget a lot of it. We were playing some pretty good hockey a week ago. Even in the Carolina game, we were playing some good hockey, too. Tonight was just a stinker. Not sure there's not much more you can say. We laid an egg."

The game with the Blues kicks off a rugged five-game homestand for Vegas, which also will host the New York Islanders, Washington, Tampa Bay and Florida.

"We've got to bounce back," DeBoer said. "We've got to be better. The good news is we've played for good stretches ... so we know how we have to play. We've just got to get it back on track again."