Ducks hope bad times are behind in visit to Hurricanes 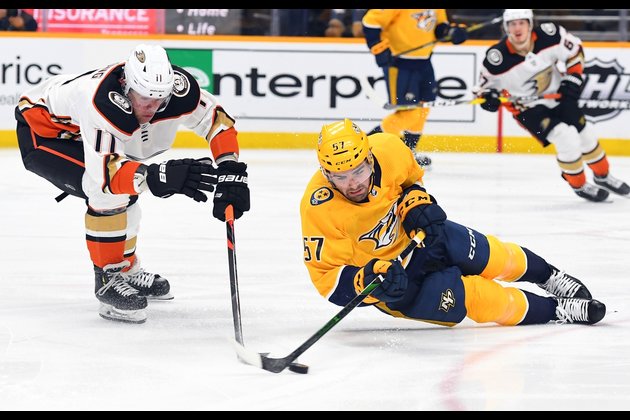 The Anaheim Ducks finally had something to be excited about and they'll try to build on that for Friday night's road game against the Carolina Hurricanes.

The Hurricanes remain in a bit of an offensive funk, though a strong outing without the desired result means they'll try to find a remedy at PNC Arena in Raleigh, N.C.

Both teams played road games Thursday night, with Anaheim producing a 4-2 victory at Nashville while Carolina suffered a 3-2 setback at Columbus.

Not only was it a loss for the Hurricanes, but All-Star defenseman Dougie Hamilton departed with a lower-body injury in the second period.

"A big loss. He has played so well for us this season," Carolina captain Jordan Staal said. "We have a great D-corps and we'll have guys fill that hole and we'll get him back as soon as we can."

The Hurricanes have had solid stretches of offense, just not on a regular basis lately. Brind'Amour liked the performance against Columbus, though it came on the back end of a stretch of not-so-smooth outings.

"I don't like what we've done here lately offensively," said Brind'Amour, whose team was shut out earlier in the week at Washington. "When we play good defending, we create a lot more chances. We're not quite there."

The Hurricanes have gone three straight games without scoring more than two goals. They haven't held a lead for the past two games.

"I'm not 100 percent dialed in with the way we're playing right now," Brind'Amour said. "It's a little bit of everything. We're still a step off from where I'd like to see us at. Still pretty good."

The Ducks snapped a four-game losing streak. It had been eight games since the Ducks won a game in regulation. They scored more than two goals in only two of those games before Thursday night.

"You have to stay confident in the system that we're doing," Ducks forward Ryan Getzlaf said.

Until the Nashville game, the Ducks had been outscored 15-6 in a four-game span. They need to keep things moving.

"If we're urgent, we have to make sure we're sticking together," Ducks forward Devin Shore said earlier in the week. "That's the only way we'll get through it."

Still, there was an encouraging sign with the Ducks notching a power-play goal for the first time in five games in the Nashville game.

This game marks the end of Anaheim's four-game road trip that consumed seven days. There's no definitive timetable for the season debut for right winger Justin Williams, who was signed by Carolina last week to come off an abbreviated retirement.

"He's getting there," Brind'Amour said. "We're going to chat this weekend at some point and see where he's at and hopefully get him in soon."

There should be some smoothness to the situation on the team as Williams builds toward returning to the ice for games.

"It's certainly an easy transition," Brind'Amour said. "... It's not really a new guy. More time will tell when we get him in the lineup and see how it works out."

This begins Carolina's three-game stretch of home games prior to a nine-day layoff over the All-Star break.