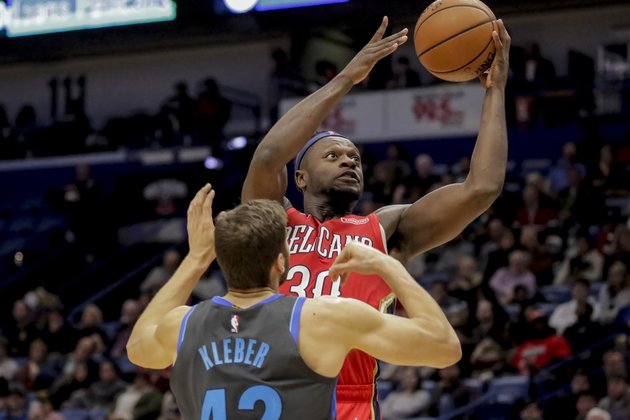 The Memphis Grizzlies are coming off an excellent defensive performance.

The New Orleans Pelicans are coming off an excellent offensive performance.

Both teams will try to build on those outings when they meet Friday night in the Smoothie King Center in New Orleans.

The Grizzlies held the Los Angeles Clippers to their lowest point total of the season, 31 below their average, in a 96-86 home victory Wednesday night.

On the same night the Pelicans had six double-figure scorers and accumulated season highs in 3-pointers made (17 on 29 attempts) and assists (36) in a 132-106 home victory against the Dallas Mavericks.

Memphis held Los Angeles to 33.8 percent (25 of 74) shooting, the lowest percentage it has allowed this season. The Grizzles outscored the Clippers 50-30 in the paint.

"Everybody stepped up," forward JaMychal Green told the team's official website after nine Grizzlies played at least 15 minutes. "We got the game won playing defense and moving the ball as a team."

The only one of the 10 Grizzlies to play who didn't log at least 15 minutes was recently signed center Joakim Noah, who had four points and three rebounds in 13 minutes in his Memphis debit.

"I think it was a great start for him," Memphis coach J.B. Bickerstaff told the Grizzlies website. "We'll continue to build off of it."

New Orleans, which started the season 4-0 but had lost six of eight before Wednesday, will try to build off the victory against the Mavericks.

"We moved the basketball," Pelicans coach Alvin Gentry said. "We got out and ran. We did everything that we had to (do) to try and replicate what we did earlier in the season and I thought we did a good job with that.

"We get 51 baskets and we got 36 assists, and so that's saying the ball is moving and we're getting it to the right people."

One of the right people was forward Julius Randle, who has started the last two games while Nikola Mirotic has been ill. Randle had a career-high 37 points in a 129-126 loss to the Clippers on Monday and had 27 points and 18 rebounds against the Mavericks.

"He makes it look easy and we feed off of him," guard Jrue Holiday said of Randle. "When he has that energy, he's a bull. He's hard to stop."

Moving into the starting lineup has allowed Randle to play more minutes alongside All-Star forward Anthony Davis, who also scored 27 points against Dallas despite missing a few minutes of the third quarter after twisting his left ankle.

"Anytime you share the floor with a guy like that, it's always going to make the game easier," Randle said. "It's a different dynamic. It's a lot for defenses to really adjust to."

Gentry said Randle's play the last two games has him considering keeping Randle in the starting lineup even after Mirotic returns, which could be as soon as the game against the Grizzlies.

Speaking of lineup changes, Gentry started Solomon Hill in place of E'Twaun Moore at forward against the Mavericks to try to replace some of the offense lost by the bench with the insertion of Randle into the starting lineup.